The first of four Extreme Light Infrastructure projects in Eastern Europe gets the go-ahead, and will be constructed near Prague. 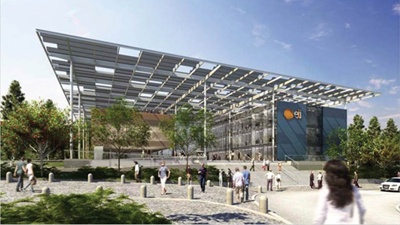 The European Commission (EC) has approved the first of the four proposed giant laser projects in eastern Europe that comprise the Extreme Light Infrastructure (ELI) program, an investment in laser science and applications valued at €700 million.

That approval means that the first project, which will be based close to the Czech capital Prague, has cleared its final hurdle. The related efforts in Hungary and Romania remain at an earlier stage and are not yet fully approved. A decision on the fourth project, which is aiming to deliver a 200 PW laser - and a roadmap to exawatt-level power - is expected next year.

EC spokesman Ton van Lierop told optics.org: “The three countries already selected have decided to finance the ELI project under the EU Cohesion Policy, hence with the help of the Community’s Structural Funds.”

“Each of the three countries needs to integrate ELI into one of their Operational Programmes for regional funding, under which concrete projects can be realized.”

The Czech effort is by far the most advanced of those projects: “On April 20, the Czech part of the project [was] approved by EC through a respective Commission Decision,” van Lierop confirmed. This part of the ELI plan comprises the Beamlines Facility, and will focus on providing ultra-short energetic particle (10 GeV) and radiation (up to few MeV) beams produced from compact laser plasma accelerators to users.

Attosecond pulses
Back in January, Hungary’s new government confirmed that it stood by the ELI project as part of its medium-term plan for economic development. However, the government has not yet submitted the ELI major project application to the EC – although van Lierop says that this is expected at some point this year.

Set to be built in Szeged, the Hungarian effort will focus on delivering attosecond pulses, to allow scientists to observe electron dynamics in atoms, molecules, plasmas and solids.

In Romania, the situation is even less advanced, with EC officials yet to receive any official document or information about the project here. “We are aware that the Romanian authorities are preparing a file on the project,” van Lierop said.

Slated for the city of Magurele, the Romanian effort under ELI will focus on laser-based nuclear physics, by coupling a high-energy particle accelerator with a high-power laser.

Each of the four projects, while scientific in scope, will also help to stimulate local economies, as well as the optical supply chain required to support the construction of the giant sources. And although the facilities will all be based in eastern Europe, the ELI effort involves partners from across Europe, including the UK’s Central Laser Facility, FORTH-IESL in Crete, and CNRS in France, among many others.