Everybody knows that major cuts to the US defense budget are coming. Diversity will be the key to survival, hears Mike Hatcher. 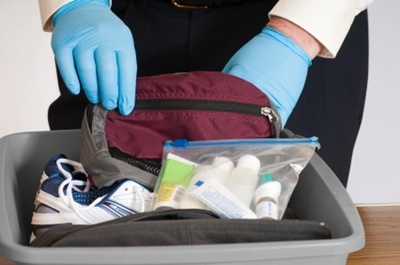 Seasoned air travellers know the routine only too well: shoes off; laptop out; remove the belt; metal objects in the tray; liquids in the re-sealable bag. In fact, it’s such a familiar routine that it’s becoming hard to recall the days when airport security did not involve a long line of flustered people in various states of undress.

Of course, the final reckoning of Osama bin Laden has brought back vivid memories of the Twin Tower and Pentagon attacks, along with a sharp reminder of why those long lines of travellers don’t get quite as flustered and angry as they might.

But airport security is a long way from being perfect. The introduction of millimeter-wave scanners that can see through clothing has brought invasion of privacy to an entirely new level in recent months, prompting a number of protests in the US.

More changes are on the way, and this is part of the reason why optical detection of explosives, not to mention biological and chemical weapons and other contraband such as counterfeit drugs, featured so heavily at the 2011 Defense, Security and Sensing (DSS) conference and trade show in Orlando, Florida, in the last week of April.

Liquid testing rules change in 2013
In fact, some major changes have already come into force in Europe – although one major problem is that the same detection technologies are not being employed everywhere. But probably the key change is going to be in April 2013, after which the ban on taking liquids and gels in containers larger than 100 ml onto aircraft is set to be scrapped.

However, liquids will still be screened at security checkpoints, and here is where an opportunity for optical technologies may arise. That’s certainly the view of Paul Loeffen, CEO of the UK-based company Cobalt Light Systems, which specializes in advanced Raman detection techniques.

Speaking at DSS, Loeffen said that the company was close to developing its first surface-offset Raman spectroscopy (SORS) instrument for airport security applications, with the company’s latest test results showing that the tool picked up 24 out of 25 ‘threats’, for example clear liquids like peroxides, and flour-like powder materials, inside the required time and with a false alarm rate of about 1%.

One crucial aspect with the SORS approach is to adopt a suitable offset distance from the material under investigation – with larger offsets appearing to work better for clear liquids and closer offsets best for powders. Loeffen added that the “Insight100” tool, suitable for investigating large liquid-containing bottles, should be launched later this year.

Anthrax and ricin
Also working on detecting hazardous materials with a variant of Raman is the SAFRAN subsidiary Morpho Detection. Morpho already sells a handheld system that identifies chemicals by their basic Raman signals, a tool aimed at first responders. Now it is looking to go a step further, with a similar piece of kit that uses the more complex surface-enhanced Raman spectroscopy (SERS) technique to specify biological agents including anthrax and ricin – both of which have previously been used in terrorist attacks – as well as abrin toxin, seen as an emerging threat. 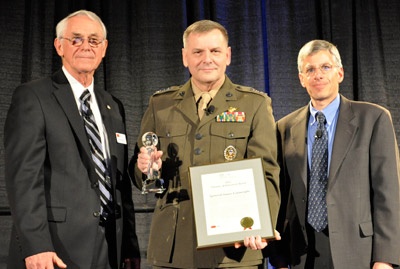 To do that, Morpho (previously Sagem Sécurité) is working with GE Global Research on a sandwich immunoassay approach that uses gold nanoparticles as SERS tags, generating a less complex Raman spectrum that can be more easily recognizable as that of a nerve agent. Now in the advanced stages of commercializing the approach, Morpho estimates that its hand-held Raman detector featuring SERS will cost somewhere in the region of $45,000.

These advances were just two among many at what has become a remarkably diverse event. But, ahead of its 2012 relocation to Baltimore – closer to the movers and shakers at the US Department of Defense – the topic exercising many at DSS was the anticipated budget cuts that are likely to be set by the US government for fiscal 2012. After all, this remains a defense industry show above all else.

Budget worries
Nobody is in any doubt that some significant cuts are on the way – with most expecting an overall slash of 15-20% to defense spending. But exactly how that will translate to individual procurement programs and research projects remains to be seen.


DARPA director Regina Dugan was giving little away in her conference-wide plenary address, which packed what appeared to be the entire show delegation into either the main arena or the overspill room. What Dugan did make clear was that the results of science and technology efforts in the defense sector must translate directly to tangible benefits for those on the front line, and key support activities in intelligence, surveillance and reconnaissance (ISR).

With billions already spent on ISR, and mountains of data being produced by the various sensor technologies now deployed, Dugan’s central message was a call to develop ways to better handle all that information, rather than simply add to it. What she doesn’t want to hear about is speculative 30-year projects expecting lavish funding.

That is not to say that DARPA will stop funding some potentially game-changing projects – perhaps more that defense projects will be streamlined into those that can be seen to have direct impact in military operations, and those riskier efforts that show the clear possibility of a very high reward. Projects that sit in-between those two extremes seem more likely to be overlooked in the future.

Diversification strategies
According to number of companies speaking to optics.org, the key to survival will be diversification. Those who are not reliant on the defense business largely see it as a nice, high-margin business to maintain – but not a dominant part of their overall mix. Also important is a mix of projects and technology deployments across different defense applications. Those who are highly exposed to a single or small number of specific projects or application areas are most at risk of a shock.

Those looking for further hints of what may or may not survive future budget cuts were in attendance at a specially-arranged session on US government funding hosted by Paul Mcmanamon, formerly of the Air Force Research Laboratory (AFRL) and recently installed as one of the co-chairs overseeing the Harnessing Light II study on photonics development. 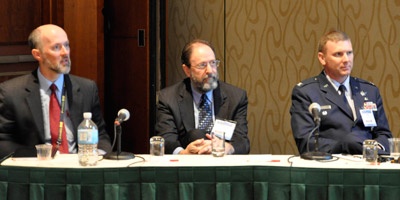 Colonel Jeffrey Smith, deputy director of the AFRL’s plans and programs division, told attendees that the lab had recently begun prioritizing its requirements for the first time, and that the key need was for technology that enabled good decision-making in operations. The Air Force has always been wedded to technology for air superiority, he said, but costs are now becoming a greater consideration. With the word “affordable” featuring prominently on Smith’s first slide, the matter-of-fact colonel said, “Funding is tight – it’s not flowing like water. Things have changed.”

Smith highlighted directed energy and sensors as two key areas that are of clear relevance to the photonics industry, although the AFRL’s nearer-term flagship development priorities – a highly ground-penetrating weapon, a reusable booster for space launches, and disruptive cyber capability – are less obviously connected with photonics technology.

The open competition, which will be unaffected by ITAR rules and regulations, will be hosted via YouTube and features a $100, 000 prize for the winners, as well as a contract with a system manufacturer to build 10-15 drones, with communications and sensing two key attributes that will inevitably feature a high photonics content.

One of DARPA’s more recent spin-offs is its intelligence wing, IARPA, whose aim is to develop Bond-style technology for covert operations such as the one that sealed bin Laden’s fate. Ed Baranoski, director of its Office of Smart Collection, re-iterated Dugan’s central point that the production of ever-increasing mountains of data from sensors and cameras was not in itself useful, given that there was a limit to the number of [human] analysts required to interpret those data in a meaningful and accurate way.

Baranoski is looking for “ways to make the important measurable”, for example through developing technologies that are able to measure “trust” – in other words, to sense reliable, valid signals of truth-telling that work across both gender and cultural boundaries. In terms of photonics relevance, imaging techniques used in facial and ocular recognition could provide that kind of intelligence, in connection with very smart data interpretation. 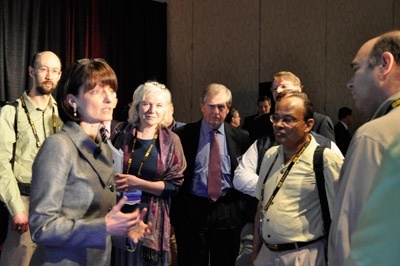 Belt-tightening
Those who attended DSS this year were only too aware of the likely funding squeeze to defense in the US, and DARPA is no exception. Already dealing with a 10-12% budget cut this year, Neyland said, “We all have to tighten our belts. And we will have to think differently.”

It is clear that there will be real pressure on research budgets within defense, with the assembled panel saying that it would be naïve for anybody to assume that spending will remain at the levels seen over the past decade. But there is also widespread acceptance that research and development mustn’t be sacrificed, and that could mean that cuts are more keenly felt further along the development pipeline – at the technology acquisition level.

One suggestion is that the level of performance required of defense technologies could be relaxed, since “zero-failure” expectations can add disproportionately to procurement costs, particularly when it comes to semiconductor technologies. Although this was acknowledged by the government representatives as a possibility, within the industry there is a good deal of skepticism that such a shift in mentality could ever be acceptable.

Indeed, many are concerned that there are bigger problems than cost-cutting on the horizon. Something that everybody agrees on is that there is a real problem as far as the recruitment of highly skilled young scientists and engineers is concerned. “A crisis is looming,” said DARPA’s Neyland, adding that his employers are working hard to involve schools and colleges and engage young technologists. The open competition for UAV development is just one part of that drive, he said.

By the time DSS takes place in Baltimore next year, there should at least be a clearer idea of the extent of those budget cuts – assuming that the US political system has been able to pass the relevant legislation by then.