Speaking at Defense, Security and Sensing 2011 in Florida, Regina Dugan urges development of better ways to handle a growing mass of data. 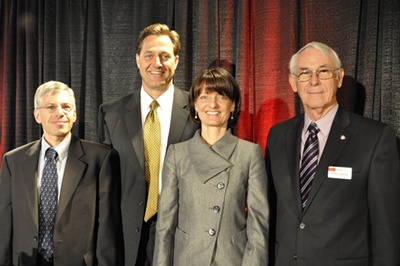 by Mike Hatcher in Orlando.
Better sensors and, crucially, better ways of handling the data that they produce, are needed by the US military to properly exploit the advanced technologies being developed for intelligence, surveillance and reconnaissance (ISR) applications.

That was the central message from Regina Dugan, director of the US Defense Advanced Research Projects Agency (DARPA), as she addressed thousands of delegates at the formal opening of the 2011 Defense, Security and Sensing (DSS) event in Orlando, Florida.

In a provocative plenary talk entitled “On choosing…”, Dugan noted that, having spent billions of dollars on developing ISR technologies, US warfighters and analysts were now faced with a monumental and escalating task to handle all of the information being provided. “We are swimming in sensors; drowning in data,” said the DARPA chief. Much of that data is produced by optical sensors, for example visible-range surveillance, infrared cameras and hyperspectral imagers.

The challenge for the defense science and technology community now is to provide the leadership to inform key decisions being made within DARPA and the Department of Defense (DoD) when it comes to deciding how to handle all that information. One of the main priorities is for better and more context-rich data representation, she added.

“A TCP/IP for ISR”
And, referring to one of DARPA’s greatest past achievements, Dugan told delegates that the sensory overload could be aided by the development of a smart network, analogous to the Internet. “We need a TCP/IP for ISR,” she said, recalling the Internet Protocol research that DARPA embarked on in the early 1970s, and which generated the standards on which today’s Internet is constructed.

Doing that would ultimately enable the ISR equivalent of social networking, based on resilient and adaptable information architectures, said Dugan, referring to the natural hierarchies that result from the dissemination of true information across networking sites such as Facebook and Twitter, and which played a critical role in the revolutions that have swept Tunisia and Egypt.

DARPA projects that might evolve to offer that capability include the “Insight” effort that envisages a “global ISR workstation”. It aims to combine self-aware sensors, for example hyperspectral images and Doppler lidar, to deliver more useful data to the military, in a form that can be directly exploited.

Lost faith
Recalling past trips to visit military operations in Afghanistan, Dugan remarked on the “deeply troubling” revelation that US forces seemed to have lost faith in the science and technology community’s ability to provide solutions to the everyday problems that they face.

But with many more scientists and technologists now playing a direct role in those operations, there are signs of an improvement. Dugan cited the example of the “HALO” project for collecting airborne sensor data, which has cut dramatically the time required for aircraft to survey the landscape in Afghanistan, and had a direct impact on the ability of military pilots to find safe places to land.

Ultimately, that operational improvement has boiled down to the development of more sensitive detectors operating in the short-wave infrared (SWIR) spectrum. Now sensitive to just ten photons, rather than hundreds or thousands, much faster image capture has been enabled.

The DARPA director is no stranger to photonics technologies herself. Through the Dugan Ventures niche investment firm, she helped to found RedXDefense, which is developing fluorescence-based technologies to detect explosive materials, serving as the company’s president and CEO.

She left the DSS crowd in no doubts about the challenges faced, and the role that they need to play, urging them to “get in the fight”, and inform the right choices for investment. “The nation and its warfighters depend on those choices,” she concluded.