Polished and coated hexagonal primary mirror segment for the giant space telescope will eventually be used as a flight spare by NASA. 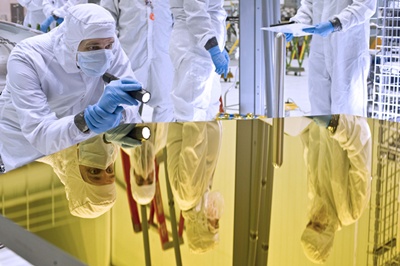 The first fully-tested mirror segments for the James Webb Space Telescope have arrived at NASA’s Goddard Space Flight Center. NASA says it has taken delivery of one primary mirror segment and one secondary mirror segment, which are now undergoing tests.

Northrop Grumman’s Aerospace Systems division, which is leading the development of the giant optical components, says that the delivery of the first primary mirror segment is a key milestone for the program, which has now been under way for seven years.

“Finishing this primary mirror segment assembly…verifies the effectiveness of our manufacturing process and paves the way for completion of the 18 flight segments, which are closely following this development unit,” said Scott Willoughby, program manager for the Webb telescope project at Northrop.

The Webb telescope – designed as a successor to the Hubble Space Telescope, whose mirrors infamously suffered from problems with spherical aberration – will use a primary mirror consisting of 18 individual hexagonal mirrors, each weighing some 20 kg. Those 18 segments will then be tessellated into a giant hexagon shape.

Optical prescriptions
The complex design of the primary mirror means that three different optical “prescriptions” are required. Six segments manufactured at each of those three prescriptions will go into the final instrument, while an additional “flight spare” will also be made for each prescription.

Once unfolded in space, the primary mirror will have a diameter of 6.5 m – more than twice that of the circular Hubble mirror. Each of the 18 segments, which are made of beryllium, will be individually controlled and aligned, while six actuators around the edge of each mirror and another in its center will allow the radius of curvature of the instrument to be adjusted. 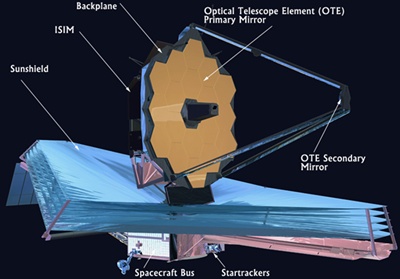 The primary segment that has just been delivered was cleaned by Ball Aerospace & Technologies, while Quantum Coating coated the mirror with gold to maximize infrared reflection. The initial mirror blanks were produced by Axsys Technologies.

That first segment is set to be one of the flight spares, but in all other respects it is identical to the components that will go into orbit. “That means it can be used on the actual telescope,” explained NASA. “In fact, it could even be put on the telescope now if needed.”

The JWST is currently scheduled for launch in 2014. Its scientific mission is to search for light from the very first stars and galaxies to form after the Big Bang, as well as study galaxy evolution, star birth and distant planetary systems. Its main instruments include a mid-infrared imager and spectrograph covering the 5-27 µm range, and a near-infrared imager with a wavefront sensor, operating across 0.6-5 µm.