Fresh from its initial public offering of stock in February, the maker of photonic integrated circuits posted record revenues in 2010. 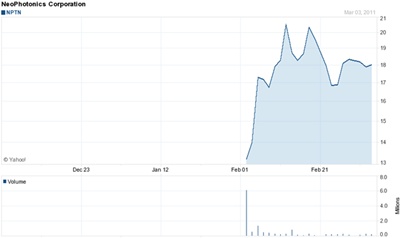 NeoPhotonics, the San Jose, California, manufacturer of products based on photonic integrated circuits (PICs), has posted its first-ever annual profit.

The company, which completed its initial public offering (IPO) of stock just last month, swung to a profit of $3.3 million in fiscal 2010 on revenues of $184.1 million.

That represented a 19% increase in sales from fiscal 2009, reflecting the current positive mood in the optical communications sector and the investment in networks required to handle growing data traffic.

Tim Jenks, the NeoPhotonics CEO, said: “Our strong financial performance demonstrates the positive demand we are seeing for our PIC-based technologies and products with the world’s largest network equipment manufacturers.”

The company says that it added 17 product family design wins in 2010, and that its top-tier customer group includes all of the world’s leading network equipment companies.

Bay of PICs
NeoPhotonics also recorded a strong closing quarter to fiscal 2010, posting $51.3 million in sales, up 9% sequentially from the September quarter. However, in its outlook the company predicted that there would be a slow-down in the current quarter, with sales falling to between $44 million and $47 million.

NeoPhotonics’ financial results and successful recent IPO, combined with the impact of its near neighbor Infinera (both companies have state-of the-art PIC manufacturing facilities in the Bay Area), demonstrate the significant market penetration of PICs in optical communications networks.

Infinera’s technology will feature in a new 100 Gb/s pan-European network being built by Interoute, for example. In a recent demonstration, Interoute carried live traffic on a high-speed link between Amsterdam and London, with transmission based on Infinera’s PIC-based 100Gb/s channels.

NeoPhotonics’ stock price has performed well since its debut on the New York Stock Exchange at $11 per share raised $82.5 million, rising quickly from the launch price and trading at around $18 for much of the past month. But investors appeared less impressed with the updated financial outlook and that price fell by around 7% in after-hours trading following the latest results announcement.

• In early trading after NeoPhotonics' annual results announcement, the stock was trading down 15% on its previous close, at around $15 per share.