Universal Display Corporation boosts its balance sheet as it completes a public offering of 5.75 million shares. 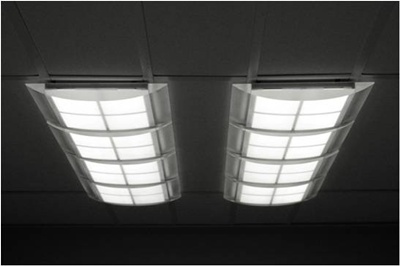 The company, which sold 5.75 million shares at $46 each to raise the funds, will be able to add significantly to an already healthy-looking balance sheet as a result – UDC ended 2010 with $73 million in cash and no debt, and its stock price has risen dramatically over the past year (see chart below).

Exactly how the company plans to spend the money raised is unclear. In its shelf registration statement with the US Securities & Exchange Commission (SEC), UDC gave little indication. In recent months the company has acquired OLED-related intellectual property from Motorola, and it is possible that more patent acquisitions could be on the cards.

The additional cash will also allow UDC to expand its research and development activity. One of the company’s key targets is to develop better OLED materials, both for the displays market – where the technology is already proliferating in mobile handsets – and, in the longer term, for general lighting applications.

“One of our primary goals is to develop new and improved phosphorescent OLED technologies and materials with increased efficiencies, enhanced color gamut and extended lifetimes, which are compatible with different manufacturing methods, so that they can be used by various manufacturers in a broad array of OLED display and lighting products,” said the company in a recent SEC filing.

Last year, UDC's VP of technology commercialization Janice Mahon told optics.org that one of the key challenges facing the company was to demonstrate the scalability of its "UniversalPhOLED" technology. UDC is partnering with manufacturing giant Moser Bauer in that respect, and the additional cash could be diverted towards that activity. 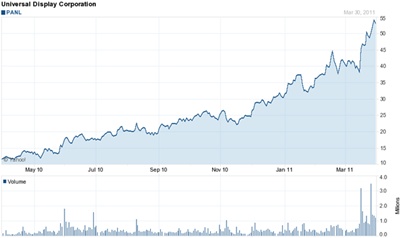 Mahon also highlighted the challenges of efficient light extraction, saying: "We still need to identify a thin, low-cost out-coupler." With the additional funds now at hand, UDC may try to drive that development faster.

In the company’s recent investor call for its fiscal year 2010 results, UDC’s CEO Steve Abramson said that he thought the OLED market had reached an inflection point, with key developments in 2011 and 2012 likely to include tablet PCs featuring the technology. The long-awaited arrival of OLED-based televisions is another possibility, with the Korean company LG Display rumored to be gearing up for production.

UDC doubled its sales revenue in 2010, but heavy spending on research and development meant that it still registered an operating loss of just over $10 million.