The medical laser company reports a 5% sales increase in 2010, with double-digit growth in China, India and Latin America. 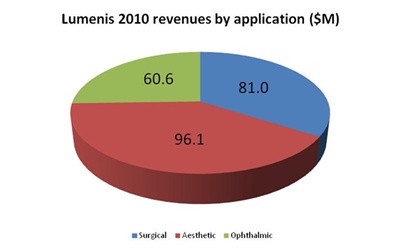 Lumenis, the Israel-based developer and manufacturer of medical lasers, has posted revenues of $237.7 million for 2010, up 5% from $226.1 million the previous year but still significantly lower than the 2008 level of $256.5 million.

Announcing the results, CEO Dov Ofer noted that the emerging markets of India, China and Latin America all grew at double-digit rates, as the company made “aggressive” investments to increase its presence in those locations.

The company registered a marked improvement on the bottom line, delivering a $5.7 million net profit, up from $2.7 million in 2009.

Ofer added that Lumenis was actively looking to expand its operation, including through possible acquisitions. The fact that the market for medical lasers is a somewhat fragmented space, with many small companies having a tough time in a market that has been slow to recover from the credit crunch, suggests that this strategy has some potential. However Lumenis has cash and short-term investments of only $43 million listed on its balance sheet, which may restrict its options somewhat.

Several of those presentations concentrate on potential laser treatments of severe burn scars. Rox Anderson, MD, a professor of dermatology at Harvard Medical School, said of the topic: "Our understanding of how to use laser technologies, alone and in combination with other therapies [to treat burn scars], is rapidly advancing. It appears that ablative fractional laser and medical treatment are synergistic."

Another MD, cosmetic surgeon Ronald Moy from the Beverly Hills area of California, is set to present results from the first histological study of the effect that Lumenis’ UltraPulse fractional CO2 laser has on mature burn scars. "This research, although investigational, is a critical step in our understanding of scar revision," said Moy. "Improved survival rates for burn victims have created an important need for patients living with painful physical and emotional scars.”

Other presentations at the event will look at the use of a long-pulsed 800 nm diode laser treatment for hair removal, a micro-ablative CO2 anti-wrinkle laser treatment, and laser-assisted delivery of stem cells.