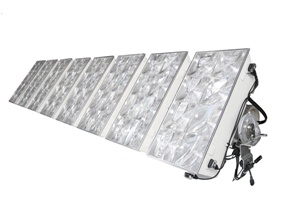 Emcore, the US manufacturer of optical components including high-efficiency solar cells and concentrated photovoltaic (CPV) systems, has acquired the assets of Soliant Energy – also a CPV specialist.

The deal, which Eric Wesoff from Greentech Media has reported to be worth just $450,000, was completed under an “assignment for the benefit of creditors” process – essentially a form of bankruptcy involving a sell-off of company assets. Emcore, which as a cell supplier to the company may have been one of the creditors, stressed that it did not assume any of Soliant’s liabilities.

Unusually for a CPV firm, Soliant had been targeting rooftop installations, rather than the large-scale solar farms that CPV is generally thought to be more suited to. Although many remain skeptical of the technology in any implementation whatsoever, a recent utility-scale contract won by the Soitec subsidiary Concentrix Solar points to something of a commercial breakthrough – provided that a politically sensitive Department of Energy (DOE) loan guarantee comes through.

But Emcore evidently sees some potential in the rooftop approach, and it has set up a new “rooftop CPV systems” division, of which Soliant’s Rick Russell is the new VP of engineering.

The Soliant assets acquired include equipment, intellectual property and tooling to manufacture the rooftop systems. Emcore said that it would integrate Soliant’s research and development and pilot production efforts within its existing site in Alhambra, California. Its commercial manufacturing operation – such that it was – is expected to transfer to Emcore’s China-based CPV joint venture Suncore.

The major losers in the deal would appear to be the venture capitalists who had funded Soliant over the past few years. The company announced as recently as August 2008 that it had raised $21.5 million in Series B equity funding, with Trinity Ventures and Rockport Capital Partners listed among the beneficial owners.

Soliant had also received some financial support for developmental work from the DOE in the past.

Emcore has had no shortage of problems itself with the development of CPV technology. In 2008, it was embarrassed when an Australian customer’s large order for multi-junction cells turned out to be less than credible, while last year its initial plans to split its solar activity into a separate corporate entity through a joint venture in China were scuppered by the White House.