Imaging technology from UK company allows scientists to get up-close and personal with the Sun's nearest neighbor for the first time. 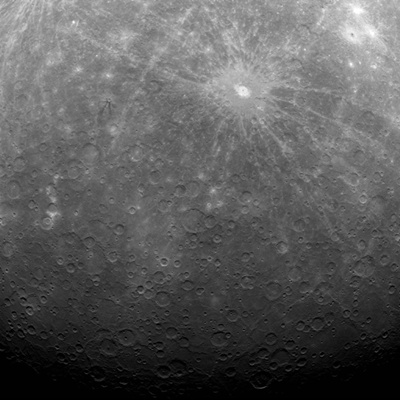 CCD sensors on board NASA’s Messenger spacecraft have returned the first images from a spacecraft in orbit around the planet Mercury.

The craft, launched back in 2004, is the first to conduct an orbital study of the Sun’s nearest neighbor – and also the smallest planet in the solar system. The only previous man-made visitor was Mariner 10, more than 35 years ago. Messenger has already conducted fly-bys of Earth and Venus en route to its target destination, and it will now perform a year-long study of Mercury in close-up detail.

UK company e2v Technologies supplied the CCD sensors used in the orbiter’s Mercury Dual Imaging System (MDIS). Those sensors comprise a multispectral, wide-angle camera and a monochrome narrow-angle camera, and will map the rugged landforms and spectral variations on the planet’s surface in monochrome, color and stereo.

The instrument uses e2v’s CCD TH7888A, a 1024 x 1024 pixel frame transfer sensor, allowing up to 30 images per second, with anti-blooming functionality and a possibility of 2x2 binning operation.

On-board optical instruments
Messenger has a number of on-board instruments using photonics technologies. As well as the MDIS, which uses two imagers to allow scientists to “see” in a similar way to human eyes, there is a laser altimeter, which will bounce light off the planet’s surface to produce topographical data of Mercury’s surface.

The Mercury Atmospheric and Surface Composition Spectrometer (MASCS) is sensitive to light across the spectrum from ultraviolet to infrared wavelengths. It will look for any atmospheric gases still present, and will also be able to pick up spectroscopic signals showing any minerals on the planet’s surface.

Other scientific instruments include a gamma ray and neutron spectrometer, a magnetometer, a radio instrument using the Doppler effect to study mass distribution, and an Energetic Particle and Plasma Spectrometer that will measure the composition, distribution, and energy of charged particles in Mercury's magnetosphere.