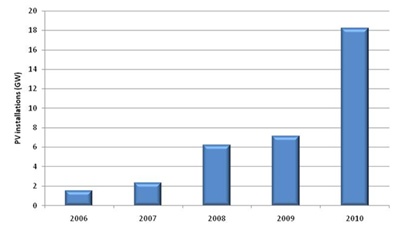 Solar photovoltaic installations more than doubled last year, reaching 18.2 GW – up from about 7.5 GW in the previous year as installers rushed to beat impending tariff reductions in mature European markets. Analysts at Solarbuzz say in their latest report that the global PV industry also generated record revenues of $82 billion – up from $40 billion in 2009.

The rapid growth of the PV market in 2010 exceeded all but the most optimistic of forecasts, with solar cell production also more than doubling year-on-year to reach 20.5 GW.

San Francisco-based Solarbuzz also noted that companies in the PV supply chain raised more than $10 billion in equity and debt during the past year, while thin-film solar technologies started to make a significant impact, accounting for 13.5% of all production.

Geographically, Europe still represents by far the largest sector, with 81% of the market, while the three leading European countries of Germany, Italy and the Czech Republic together accounted for 12.9 GW of demand.

However, that geographical concentration is set to change from 2011. Last year, PV installations doubled in both Japan and the US, and further rapid growth is expected this year, just as the leading European markets have to face up to lower financial support via feed-in tariffs.

Looking into 2011, Solarbuzz had previously expected the opening quarter of the year to be a difficult period, as those tariff reductions came into force. But Craig Stevens, the Solarbuzz president, has adjusted that expectation somewhat, saying:

“The rush to beat mid-year tariff reductions will ensure strong first-half 2011 demand performance in Italy and Germany.” However, the overall rate of market growth will slow significantly this year – Solarbuzz had previously pegged its expectations for market expansion at 25%. 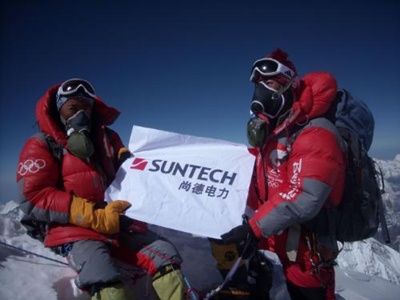 Suntech: top of the world

Growing US contribution
The expectations of growth in the US market were made evident by First Solar’s announcement last week that it would build a module factory in Arizona with an annual capacity exceeding 250 MW. Making the announcement, First Solar’s president Bruce Sohn highlighted the impact of Department of Energy (DOE) loan guarantees and solar tax credits, which have provided great impetus to the US market – and without which it is likely that the company would have looked elsewhere.

As the newer markets in North America and Asia continue to expand, Solarbuzz expects that the European share of the total market will fall to around 50% by 2015. “The US will be the fastest-growing major country market over this period,” it predicted.

According to the analyst firm, First Solar now ranks as the world’s third-largest cell manufacturer, behind the Chinese giants Suntech Power and JA Solar – who were tied for the leading position. Earlier this month, Suntech announced in its fiscal year 2010 results that it made total PV shipments of 1.57 GW, while JA Solar had put its own figure at 1.46 GW.

Among the other key predictions from the Solarbuzz analysts are that module prices will fall steadily over the next five years, by 2015 dropping to as little as half of their current level. However, Stevens emphasized that political decisions will remain more critical to shaping market forces than industrial developments:

“The industry has now entered a phase of tightening incentive terms across important European markets,” he said. “Cuts in unit tariffs will be far more rapid than the industry’s pace of cost reduction.”

The quoted findings form part of the Marketbuzz 2011 report, which provides a forecast for the 2011-2015 period and is available now from Solarbuzz.