Optical device production at some of Japan's major manufacturing locations is suspended following the huge earthquake and tsunami. 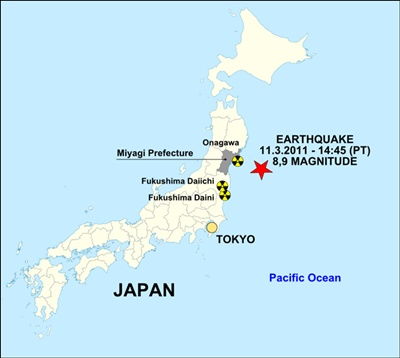 Some of Japan’s leading manufacturers of optical and optoelectronic devices have suspended operations at key locations, following the devastation to the north-east of the country caused by the magnitude 9.0 earthquake and tsunami on March 11.

Sony, Canon and Nikon have each reported damage to optical device and component manufacturing sites as follows:

Sony has a number of factories located in the worst-hit areas of Japan. These include the company’s Shiroishi Semiconductor site, which produces blue laser diodes for Blu-ray Disc and Playstation 3 applications. This site is in Miyagi Prefecture, close to Sendai – the city nearest to the earthquake’s epicenter – and Sony has suspended operations there until further notice.

Also close to Sendai is Sony’s Tome Plant, which produces high-quality anti-reflection optical coatings for applications in 3D and high-definition flat-panel displays. This site is part of Sony’s Chemical and Information Device Corporation, and operations have been suspended here also.

“In addition to these manufacturing sites, Sony Corporation Sendai Technology Center (Tagajyo, Miyagi) has ceased operation due to earthquake damage,” said the company.

Canon has reported injuries to 15 employees, and “significant” damage at a number of sites located in Utsunomiya, Tochigi Prefecture – about mid-way between Tokyo and Sendai. Operations at the company’s Optical Products Plant and Optics R&D Center at Utsunomiya are suspended, with Canon saying that there is likely to be a delay before any operational resumption.

Canon has also suspended operations indefinitely at its Optron subsidiary in Yuki, Ibaraki Prefecture, where the company produces optical crystals used in stepper, camera and telescope applications. Canon added that if operations at any of these sites were likely to be affected for more than a month, it would be able to transfer some activities to alternate facilities.

Also impacted are the company’s Sendai location, where it produces cameras, and Tochigi Nikon Corporation, whose main business is the manufacture of interchangeable and optical lenses.

Hamamatsu Photonics has stated that its manufacturing sites, located away from the worst-hit areas, had not been significantly affected by the disaster.