$20M investment in cutting-edge tools that beat the diffraction limit has added a new dimension to acute disease research. 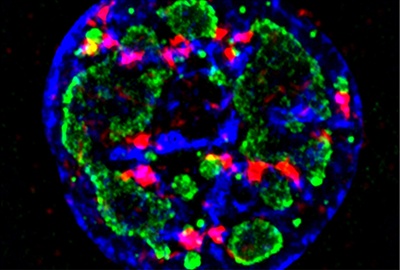 If you had a budget of $20 million to set up a world-leading and state-of-the-art biophotonics research center, what instrumentation would you purchase? That was the enviable position that scientists at the Salk Institute of Biological Studies in La Jolla, California, US, found themselves in following a gift from the Waitt Foundation in 2008.

Today, Salk’s Waitt Advanced Biophotonics Center is fully up-and-running and officially opened its doors last month. The center houses some of the most cutting-edge commercial imaging technologies available and has already played a role in understanding how viruses attack cells, and how they might be re-engineered to tackle diseases such as cancer.

“We have a cohesive array of primary tools that we can use to investigate the structure and function of biological systems,” James Fitzpatrick, the director of the core imaging facility within the center, told optics.org. “We have tried to create an imaging facility that serves the faculty and assists them in the research that their laboratories are conducting.”

A unique environment
The Salk Institute is a non-profit research institute dedicated to basic and fundamental research in the life sciences. Established in the 1960s by Jonas Salk, the developer of one of the most successful polio vaccines, the institute has a truly unique collaborative environment. There are no formal departments, just approximately 850 scientific staff working together to gain a greater understanding of some of today’s most devastating diseases such as cancer, Parkinson’s and Alzheimer’s.

The new biophotonics center houses faculty labs and a core imaging facility, with all of the researchers at Salk having access to the cutting-edge imaging equipment situated in the core.

“Vision is one of our strongest senses,” said Fitzpatrick. “Creating a state-of-the-art imaging hub and putting it in a place with such collaborative motivation will surely lead to transformative discoveries. Salk has some amazing biological research programs. We provide technical support to the faculty. They have the biological questions and we provide the technological capacity to approach the imaging.” 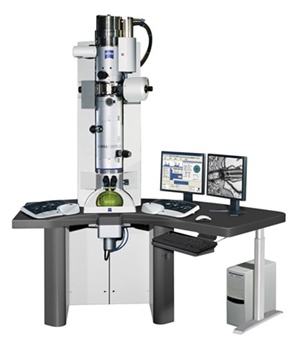 All about instrumentation
So what did the Salk Institute spend some of the $20 million on? The answer is a comprehensive array of laser and electron-based microscopes, such as a Carl Zeiss Libra 120 PLUS energy-filtered transmission electron microscope (EF-TEM) with a $1.5 million price-tag.

On the optical side, researchers have access to the latest live-cell confocal and fluorescence microscopy instrumentation from Carl Zeiss as well as high-speed fluorescence, two-photon and coherent anti-stokes Raman microscopy solutions from Olympus.

The real challenge is how to make the most of all of the information, and this is the focus of Fitzpatrick’s vision for the core facility. “There is no one magic microscopy method that will give you all the information you seek,” he said. “The answer lies in a correlative approach that will elucidate more comprehensive information and give us an idea about the structure of the system we are studying and how that dictates its function. The ability to correlate nanoscale TEM images to 3D reconstructions and movies showing dynamics is going to be truly unique.”

While the EF-TEM, for example, allows Fitzpatrick to image on the nanoscale, the disadvantage is that the samples are all fixed and dynamic imaging is not possible. On the other hand, a spinning-disk confocal microscope can create video-rate movies of processes such as viruses invading a host cell while a laser scanning confocal or two-photon microscope system can recreate high resolution 3D images. The intrinsic limitation facing all optical microscopes however is the diffraction limit, whereby light can only be focussed down to half its wavelength.

Specifically, Fitzpatrick and the group of Salk Assistant Professor Clodagh O’Shea have been looking at how a small adenoviral protein spatially reorganizes DNA within a cell’s nucleus so that genetic programs which guard the cell against viral and tumor replication can no longer be activated.

To do this, Fitzpatrick and O’Shea used a structured illumination microscope. Here, different structured grid patterns are projected onto the sample where they interfere. Using a mathematical process, super resolution information can be extracted - allowing the researchers to see structures that are about 100 nm across and around 200 nm deep. And by using different tags, it is possible to perform multi-color imaging and target different structures in the cell or cell nucleus such as DNA and viral proteins.

“By correlating this super-resolution data with live cell imaging information, we are able to visualize how the tiny adenoviral protein E4-ORF3 assembles a vast and remarkable macromolecular structure that weaves through the nucleus and compacts anti-viral and tumor genes into highly dense regions of heterochromatin,” explained O’Shea. “The novel mechanism used by the adenovirus to bypass the cell’s inbuilt suicide program could go a long way to explain how these same genetic programs are also silenced in cancer and pave the way for new types of targeted cancer therapy.”

Using this knowledge, researchers at Salk are re-engineering the virus so that it will undergo selective replication in tumor cells but leave normal cells unharmed. Such ‘oncolytic’ viruses would explode tumors from the inside-out, releasing thousands of progeny that spread out and target distant metasteses for destruction.

And as O’Shea states: “To engineer viruses so that they only kill tumor cells, we need a fundamentally deeper understanding of every aspect of virus-host interactions and how these differ from normal cells to tumor cells. We need to visualize interactions beyond the diffraction limit, such as how the virus invades its host cell, how viral DNA is replicated and packaged and how it explodes the cell so that we can re-engineer it to spread more effectively and kill surrounding tumor cells.”

Fitzpatrick adds: “Super-resolution techniques will literally allow us to see how we can overcome these challenges at almost a macromolecular resolution, and the core imaging facility is comprehensively equipped and ready to tackle these challenges.”