Soitec, currently displaying its technology at the UN summit in Durban, is set to build the facility in Touwsrivier pending a final decision. 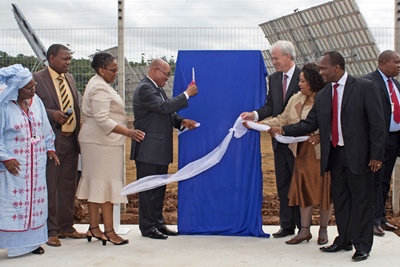 Soitec’s concentrated photovoltaics (CPV) division has been selected by the South African Department of Energy (DOE) to provide a 50 MW (peak DC) power plant in the Western Cape location of Touwsrivier.

The facility, which would produce a 36 MW AC output to the local grid, is one of 18 photovoltaic (PV) projects selected as preferred bidders in the first “window” of the country’s wider 3.7 GW renewable energy plan. Soitec told optics.org that a final decision on the plant would be made by the DOE next June, with the company ready to start the project shortly after that.

At a rated 36 MW, the installation would represent one of the largest CPV plants in the world. It will be situated close to Soitec’s existing 60 kW pilot facility in Touwsrivier’s Aquila private game reserve.

The announcement coincided with Soitec’s appearance at the UN climate change summit in Durban, and came just a couple of days before South African president Jacob Zuma inaugurated a 500 kW (peak), 32-system CPV plant assembled by the company in nearby Hazelmere in just one month, and said to have been connected to the local grid in just the past week.

Speaking at the inauguration event, and referring to South Africa’s stated aim that 42% of all the country’s new energy capacity built between 2010 and 2030 should be from renewable sources, Zuma said: “Pursuing the green economy must be linked to our overall agenda of pursuing employment-creating growth, and inclusive growth that improves the lives of our people.”

“This solar plant must therefore improve the lives of the people of Hazelmere and surroundings. For the first time, the neighboring communities will have access to clean electricity generated from their backyards, and with possibilities of job opportunities.” 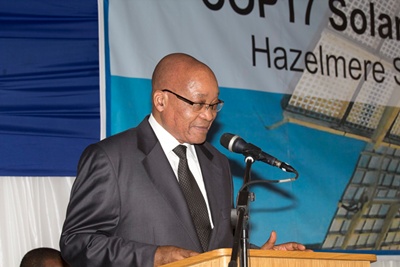 Local jobs
The partnership between Soitec and the Ethekwini Municipality will also see the company set up an education and training program for local people, through a collaboration with the University of Cape Town and the local Northlink College. Assuming that it does get the full go-ahead, the much larger Touwsrivier project is expected to create 100 direct, permanent jobs in the area.

Though conventional flat PV panels based on either silicon or thin-film technologies remain by far the most popular form of solar power worldwide, CPV provides a highly competitive alternative in locations with high direct solar irradiation. The approach also performs well in high temperatures and uses negligible amounts of water, making it highly suited to the South African climate.

Soitec’s systems use Fresnel lenses to concentrate sunlight onto high-performance multi-junction cells by a factor of 500. The company’s CPV modules are said to have an average conversion efficiency of nearly 30% - around twice that of most crystalline silicon equivalents. Dozens of the modules are mounted together on dual-axis trackers that follow the path of the sun throughout the day to keep it focused directly on the cells with high precision.

Other leading exponents of CPV technology include US-based Amonix, which is currently building a 30 MW facility in Colorado, and SolFocus, which is constructing pilot plants in Texas and also Chile. Challengers at an earlier stage of development include Canada’s Morgan Solar and US-based Semprius, both of whom have recently completed new venture finance arrangements.