The results of photonics development projects funded by the European Commission are shown at high-profile Brussels event. 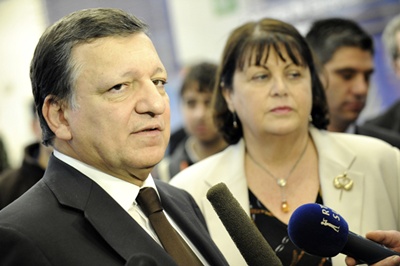 Photovoltaic textiles, nano-scale printing of photonic devices and adaptive optics for retinal imaging are among the photonics developments being highlighted at the European Commission’s very first “innovation convention”.

The convention, taking place in Brussels on 5-6 December, was opened by no less a figure than the EC president José Manuel Barroso, just days after the organization detailed its €80 billion blueprint for research and innovation over the course of the next European Union budget starting in 2014.

Convened by European Commissioner for Research, Innovation and Science, Máire Geoghegan-Quinn, the aim of the meeting is to highlight that innovation is seen as the key to sustained growth and job creation, and that the EC can bring this about by investing in both basic scientific research and ways to bring that research to fruition in the form of new technologies and products.

Among around 50 so-called “star” projects selected for the convention is the “HIRESOMI” project funded under Framework Programme 6 (FP6) to develop techniques for high-resolution microscopy. The project, which began in 2005 and received €2.4 million support from the EC, was co-ordinated by the UK’s University of Kent and also featured commercial partners Imagine Eyes from France and Multiwave Photonics from Portugal.

Though much of the project was focused on training aspects, it was also instrumental in the commercialization of a compact retinal camera capable of imaging individual cells in the human retina by using adaptive optics – in the form of Imagine Eyes’ rtx1 product, which can reveal cone cells, nerve bundles and detail of the optic nerve that are otherwise invisible. 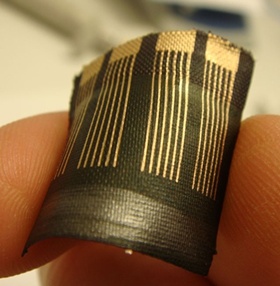 Glass microsystems
Another photonics project highlighted at the Brussels event is “FEMTOPRINT”, supported by funding under the current Framework Programme 7 (FP7). It uses a low-power ultrafast laser “printer” to fabricate nano-scale optical microsystems in glass. The €3.4 million project (overall cost) is co-ordinated by Yves Bellouard at Eindhoven’s University of Technology in The Netherlands, and will run until early 2013. The French ultrafast laser company Amplitude Systèmes is among the project participants.

Meanwhile the “FTMEMS” project, which has created new types of fiber-optic sensors used in atomic force microscopes and biochemistry, has also spawned a new company in the form of Optics11, a spin-out from Vrije Universiteit Amsterdam.

At the Brussels event, which features a wide range of big-name speakers including Google’s Eric Schmidt and author Richard Dawkins, Geoghegan-Quinn said: "Europe has to capitalise on its brightest and most innovative ideas. That is what Innovation Union is all about; that is what Horizon 2020 is designed to ensure; and that is what this Innovation Convention inspires us all to do". 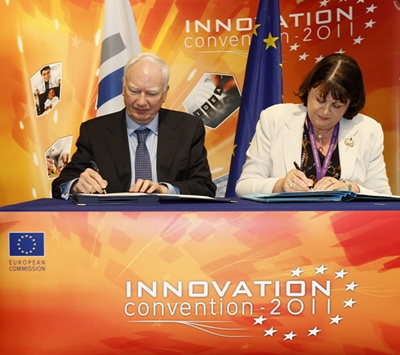 More loans for SMEs
In conjunction with the European Investment Bank (EIB), the EC also extended a scheme to help small companies obtain bank loans. Under an amendment to the risk-sharing finance facility (RSFF) that first appeared in 2007, the EC is aiming to unlock a further €6 billion of loans over the next two years, including up to €1.2 billion for SMEs and up to €300 million for research infrastructures. Geoghegan-Quinn and EIB president Philippe Maystadt signed the amendment at the start of the Brussels event.

“Without raising its potential through research and innovation, Europe will be unable to generate the growth it needs to maintain its place in the world economy," Maystadt said. "The RSFF has already helped many large and mid-cap companies realize their plans. With the changes we are announcing, we are confident that SMEs will now also benefit."

At the Brussels event, Barroso also officially named the EC’s very first chief scientific advisor – molecular biologist Anne Glover from the University of Aberdeen. The appointment comes more than two years after the EC president first said that he intended to create the post.