ABB is latest to invest in concentrating PV 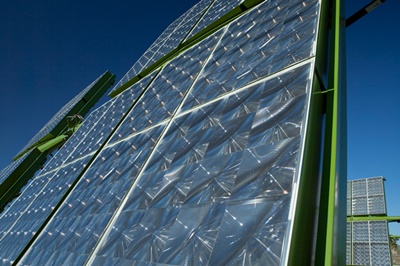 ABB’s latest investment, though its venture capital wing ABB Technology Ventures, is part of a $35 million round raised by GreenVolts. It comes just six months after the Californian CPV firm completed a $39 million round, according to the company’s most recent filing with the US Securities & Exchange Commission (SEC), and brings total investment in the firm to more than $110 million to date.

At a time when conventional PV companies are battling plummeting prices, a potential trade war and a widespread industry shake-out – Germany’s Solon became the latest high-profile casualty in the industry as it filed for insolvency last week – the GreenVolts/ABB deal is the latest in a string of investments into CPV by major energy players.

Other CPV firms to have attracted significant finance recently include Canada’s Morgan Solar, which received $9.8 million investment from Enbridge last month, while in June the German conglomerate Siemens took a 16% stake in North Carolina’s Semprius by leading a $20.6 million series C round.

On top of those deals, top-tier CPV companies Amonix and Soitec Solar are building utility-scale plants, with the latter investing $150 million to build a new CPV module and Fresnel lens manufacturing facility in San Diego, California.

David Gudmundson, CEO of GreenVolts (and previously president of JDSU’s optical communications products group), said: “Our complete and fully integrated photovoltaic system is an industry game-changer. Every component was carefully designed to work together in a turnkey solution that dramatically reduces the cost and complexity of solar projects. With ABB’s global presence and expertise, these benefits will now be available to customers worldwide.” 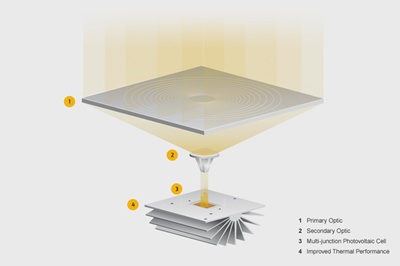 Optics for high concentration
Founded in 2005, GreenVolts has significantly changed its own game since initially developing trough-like CPV systems based on parabolic reflectors.

The company now sells a fully integrated CPV installation, including trackers, inverters and energy management software – going beyond the typical offering of a CPV firm. Where its modules differ from most competitors is in their optical complexity, with each module said to feature no fewer than 24 sets of optical components, and a concentrating power of x1300.

That design comprises a primary optic in the form of a high-concentration Fresnel lens, and a secondary optic to ease tracking precision requirements, which are exacerbated at higher concentration levels. GreenVolts’ tracker systems also have a novel feature, stowing the CPV systems face-down at night to reduce the impact of dust and condensation on the modules.

“Our complete system approach changes the entire solar experience,” added Gudmundson. “With GreenVolts, customers get simplicity, elegance, and precision in a utility-scale solar system that delivers higher performance and richer energy management than anything else in the world.”

In March 2011, ABB bought a 35% share in Novatec Solar, a German company that has developed a Fresnel mirror designed for concentrating solar power (i.e. thermal) systems. According to the Swiss firm, that technology is complementary with GreenVolts’ CPV systems – although GreenVolts uses transmissive, rather than reflective, optics.