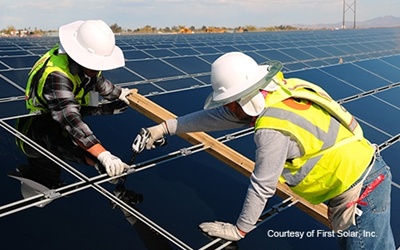 Faced with what he described as a “structurally imbalanced” photovoltaics (PV) market, First Solar’s interim CEO Michael Ahearn has told investors that the company must now focus on utility-scale projects outside of the traditional, subsidized markets that it has served thus far.

Ahearn said that the PV market was faced with a major difficulty, in that there is now effectively no constraint on polysilicon feedstock supply, and no barrier to entry for the production of crystalline silicon cells and modules. So long as capital is available and subsidized demand is uncapped, production will increase, forcing prices down in the way that has been so evident this year.

As a result, the company is changing its strategy. It faced a tough choice: continue to chase the traditional PV markets, created by government-funded subsidies but ultimately unsustainable; or embark on a new mission to provide unsubsidized solar electricity in new markets by aggressively lowering the cost of the technology. It has chosen the latter option.

Ahearn explained that choice by illustrating how every single major PV market created so far has become inherently unsustainable. Countries like Spain, the Czech Republic and France have each introduced PV subsidies that have enabled uptake of the technology to spiral out of control, meaning that their governments have been forced to cut them back. As a result, every one of those markets, and likely Italy by next year, has moved through an “inverted V” period of PV demand, with installations first spiking and then receding quickly.

“Our central learning is that open, transparent and uncapped markets cannot survive politically in an oversupplied industry with no entry barriers [for cell/module suppliers],” said the CEO in an investor call to discuss the radical new strategy. “Policy makers will learn from the past, and are unlikely to repeat the policies that led to the ‘inverted V’ pattern.” 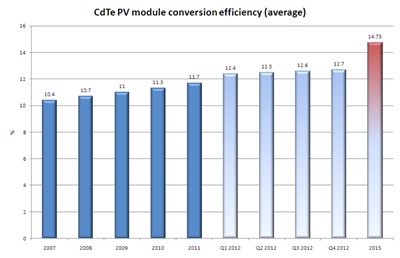 Efficiency drive is key
Ahearn believes that the only option for First Solar to thrive as a business in the future is to grow dramatically, and to do that by pushing down the cost of its CdTe technology through efficiency improvements, reduced balance-of-system costs and streamlined operations. By the end of 2014, he hopes to be selling a PV product that is genuinely competitive in the energy market, with no need for subsidies.

The CEO acknowledges that such a fundamental shift cannot happen overnight, and in 2012 First Solar’s business will remain dominated almost entirely by subsidy-driven installations.

Much of that will relate to large-scale projects in California, but those projects were initiated as far back as 2008, and although the current pipeline is very large, it will run out of steam once the current cycle of projects is completed.

The company’s three-year plan is yet to be completely finalized, but the broad aim is for First Solar’s offering to be highly competitive with electricity produced by fossil fuels by 2015, hitting a levelized cost of electricity (LCOE) of between $0.10 and $0.14 per kWh.

That would represent a dramatic change, and demands an improvement in average CdTe module efficiency from the current level of 12.7% to between 14.5% and 15% by 2015. That figure is itself a shift upwards from First Solar’s already ambitious goal, while balance-of-system costs will also be cut, from $0.87/W now to below $0.75/W. The balance of system relates to non-module costs, including site development, trackers and the interest payable on PV project finance.

Cutting PV costs is the first of three major hurdles that need to be cleared if First Solar’s strategy is to work, said Ahearn. “We cannot even begin to have a serious discussion with policymakers, regulators and utilities about large-scale solar generation until we’re prepared to price at unsubsidized levels, at scale.”

The other key challenges will be to work with regulators and utilities to adapt long-term planning of electricity grids for large-scale solar installations, and to make the transition to unsubsidized markets while protecting First Solar’s cash and profitability.

Shuttering CIGS effort
One of the early casualties in First Solar’s move to streamline operations (the firm’s new long-term business model assumes gross margins of only 15-20%, and operating margins of 8-12%) is its research activity on copper indium gallium diselenide (CIGS) PV for rooftop applications at its facility in Santa Clara, California.

In the investor call to discuss the new strategy, Ahearn said that rooftop efforts would be put on the back-burner, while in an SEC filing on December 14, the company said that it would incur a charge of $75 million related to a “significant reduction” in research of “alternative” PV products. 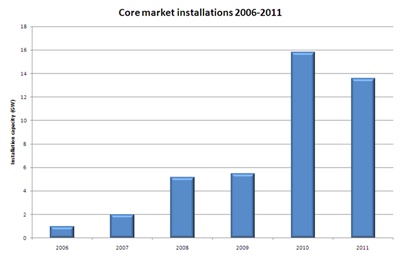 Core PV markets: on the turn?

The new outlook for First Solar appeared to receive a cool reception from investors, with shares in the company falling 20% after the plan was announced – although that would have also reflected a cut in revenue guidance for fiscal 2011, and an outlook for 2012 that fell below investor expectations.

But appeasing the market now looks to be the least of First Solar’s concerns – Ahearn and his team have their eyes firmly focused on the technological and business developments needed to convert PV into a mainstream electricity provider for the long haul.