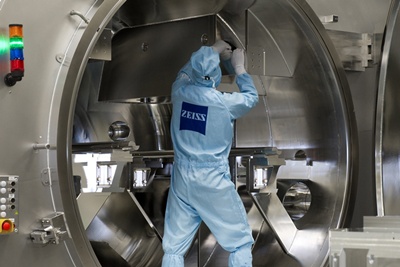 Germany-based full-time employees of the optics giant Carl Zeiss have each received a €2000 bonus this year after the company posted record sales and an 86% increase in after-tax profits.

For the first time, the group of Zeiss companies, which produces a huge range of optical and optoelectronic products ranging from binoculars to high-end microscopy equipment and includes the Meditec subsidiary that reported similarly strong performance last week, made total sales of more than €4 billion.

The fiscal 2010/2011 figure of €4.24 billion represents a 10% increase from €3.85 billion last year, when calculated on a like-for-like basis that includes revenues from the group’s acquisition of Carl Zeiss Vision – its eyeglasses division – in 2010. On the bottom line, Zeiss posted after-tax income of €386 million, up very sharply from €208 million in the previous year.

However, the company does now predict a slight fall in overall sales in fiscal 2011/2012 resulting from wider economic worries. Michael Kaschke, the group’s CEO, said:

“The lack of economic momentum and the rampant uncertainty in the global economy, partly triggered by the problem of national debt, are currently dampening optimism.”

Despite those worries, Zeiss is pushing ahead with a bold investment plan that will see it invest €500 million in an expansion of its operations in Germany over the next five years. “We are modernizing our infrastructure over the long term,” Kaschke said. “The funds are mainly being channelled into the semiconductor manufacturing technology and medical technology business groups, as well as into the research and development units.”

“Innovation can be described as the company’s DNA,” the CEO added. “Pushing the boundaries of optics is our passion and our daily work.”

EUV development
Zeiss’ semiconductor business unit was the largest contributor to overall group sales in the latest year, which has been a very strong one for investment in semiconductor manufacturing equipment across the industry. The Germany-headquartered company supplies many of the high-quality optics used in lithography stepper and scanner equipment, and a large chunk of the €500 million investment can be expected to go into development of extreme ultraviolet (EUV) optics for the next generation of these systems for future chip production.

Highlighting how EUV technology should enable an increase in chip integration densities by a factor of ten over the next decade or so, Kaschke stated: “Carl Zeiss is the right company for a technological revolution of this dimension. We are investing with vision and farsightedness. We have the strength and stamina to work on important innovations over the long term.”

While the semiconductor unit’s sales jumped 16% in the latest year, Zeiss’ industrial metrology business fared even better, with revenues up 35% to €394 million. Among other things, the metrology business sells equipment used in three-dimensional machine vision applications for production quality control.

Meanwhile, the microscopy business unit showed strong but more modest sales growth of 7% year-on-year to €423 million. The group’s medical technology business unit, which reports slightly different figures to the Carl Zeiss Meditec subsidiary, showed a 13% increase to €854 million, while sales of consumer optics like camera lenses and binoculars were nearly flat, at €316 million.

Largely as a result of its 2010 acquisition of the vision care eyeglasses business, Carl Zeiss now employs more than 24,000 people – nearly twice as many as it did before that deal. But the group has also grown organically in the past year, creating some 1200 new jobs worldwide, it says.

As a result of the €2000 bonus awarded to the 10,000 or so full-time employees who are based in Germany, plus a novel €360 additional bonus in the form of a non-transferable security similar in nature to a five-year, interest-bearing bond, the company says it has paid out €24 million in bonuses to its staff in Germany.