The laser company posted a rare quarter – one without a major displays order – but still has a very strong backlog. 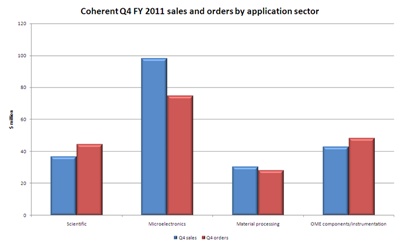 Coherent put the cap on a record-breaking fiscal year with what the company called a “solid” fourth quarter, and remains confident going into 2012 despite a sequential dip in orders.

CEO John Ambroseo said that the dip related almost exclusively to the timing of orders from the flat-panel display market, where Coherent’s excimer lasers are used to anneal LTPS (low-temperature polycrystalline silicon) backplaned organic LED displays for smart phones and, in the future, larger devices. In the last quarter, Coherent revealed details of a giant $77 million order for this application, and the company still has a large backlog to work through.

Overall, Coherent’s bookings slipped from $229 million to $195 million sequentially, but Ambroseo said: “This will have little impact on fiscal 2012 revenues for annealing systems as we have very high backlog coverage,” adding that the company is working with a number of customers in Asia on this application, and that further orders will be received next year. No delivery dates for the laser systems have been pushed back, he stressed.

Total sales in the fourth quarter of the year were slightly down at Coherent, slipping 1% sequentially to $208 million. But that did not stop the company from posting an all-time record for annual sales, orders, operating income and earnings per share.

Revenues for fiscal year 2011 totaled $803 million, up fully 33% on fiscal 2010, while bookings in the year reached $895 million, up 29%. Having generated a net income of $93.2 million in the year, the Santa Clara firm boasts a very strong balance sheet and has used $100 million from its cash balance to buy back shares while simultaneously expanding its operations significantly in Germany and Korea to support new business.

Although the company has also been trying to deploy some of its cash through acquisitions, it has as yet been unable to agree a price with any potential targets.

Fiber laser introduction
One of the sectors where Coherent is making a concerted effort to expand its offering is in materials processing, where it is now competing at the tool level, as well as supplying lasers into the market. Ambroseo said that this product line, which incorporates the company’s E-1000 CO2 lasers, was growing quickly in terms of sales, albeit from a small base. “We have an aggressive internal plan to grow,” said the CEO.

Also in the area of materials processing, Coherent is about to launch a kilowatt-class fiber laser for metal cutting applications. That product, which was previewed at the LASER 2011 event earlier this year, will be unveiled at the forthcoming Fabtech expo being held in Chicago. Initial revenues from the new fiber laser are expected by the middle of next year.

While the semiconductor capital equipment market for lasers has been in the doldrums for the past few quarters, Ambroseo now senses some signs of a rebound, saying that some key customers feel that an inflection point is approaching.

And although there are plenty of current macroeconomic headwinds – the Eurozone debt crisis, another US budget impasse and credit tightening in China to name three – there are also lots of positive developments. Ambroseo sees the healthcare sector as one of those, with short-term opportunities in the form of aesthetic laser treatments likely to be augmented by growing long-term demand for ophthalmic laser applications, particularly in cataract surgery as the global population ages. 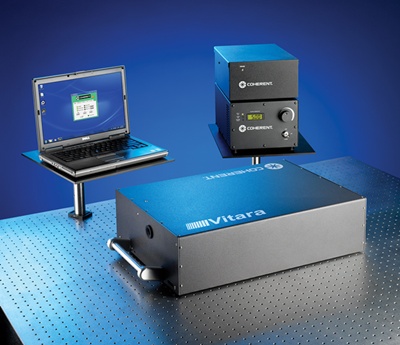 Ultrafast demand
In the scientific sector, Ambroseo said that Germany had shown particular strength in the latest quarter, along with record bookings from Asia, led by China. Coherent’s new widely tunable 12 femtosecond Ti:sapphire Vitara laser is proving popular with researchers, with orders for high-end ultrafast amplifiers particularly strong in Q4, added the CEO. Sequentially, scientific orders were up an impressive 33% at $44.4 million.

With a drop-off in orders from the photovoltaics sector, and a minor impact caused by the supply of components from flood-stricken contract manufacturers in Thailand, Coherent is expecting a decline in revenues in the current quarter – although the company has historically seen a seasonal downturn in the closing quarter of the calendar year. Revenues are expected to be down by 5-9% sequentially, to somewhere between $189 million and $198 million.

But because of the various macroeconomic uncertainties potentially impacting world markets, Coherent declined to give any full-year guidance for 2012. Ambroseo said that with a “pristine” balance sheet, robust backlog (at $356 million, up 36% compared with a year ago) and its new products for laser materials processing, Coherent would be able to respond to a wide range of market conditions next year.