Made in China, shipped to America

With the solar industry seemingly on the cusp of a US-China trade war, how low will PV prices go? 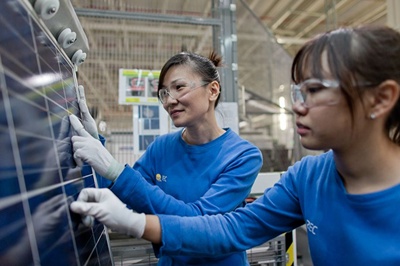 by Rebecca Pool
As prices for polysilicon, the key material used in the vast majority of today’s photovoltaic cells and modules, plummet, US and European manufacturers face immense financial pressure. Thanks to very low margins and, it is claimed, generous government subsidies, Asian polysilicon manufacturers have driven prices down to record lows of $35/kg.

Recent rumors hint that US manufacturers may liquidate equipment to stay afloat, while industry heavyweight SolarWorld, along with six anonymous accomplices, is demanding authorities slap tariffs on imports of Chinese cells and modules to level the playing field. As tensions rise, analysts predict little relief.

“Chinese and other Asian manufacturers will run at lower margins and increase capacity to gain market share,” says Finlay Colville, a senior analyst at Solarbuzz. “They are acutely aware that they are in the best place to prosper in an environment with low pricing, so as long as they can keep going in that kind of environment, then those outside Asia and China will suffer.”

Indeed, US developers Solyndra and Evergreen Solar each blamed their very public demises on foreign competition and low silicon prices. And critically, the marketplace is not set to change any time soon.

As Asian manufacturers continue to flood the market with cheap polysilicon, Colville is confident that prices will fall further, especially as cell manufacturers buy themselves out of long-term, higher priced, supply contracts to take advantage of lower 'spot' prices. “Following the rhetoric from the big [polysilicon] Asian suppliers, moving towards $30/kg is not out of the question,” he explains. “This lower pricing will drive demand at some point, bringing polysilicon pricing back up, but given the amount of silicon coming online, it's difficult to see how this will happen over the next year.”

Lux Research analyst Matthew Feinstein agrees, predicting polysilicon prices will steadily drop to $30/kg. “The Chinese players are going to win on cost,” he says. “If [non-Asian] polysilicon manufacturers can compete on costs then there's a shot at the competition, if they can't, well... being cost-competitive is mandatory.”

How to compete?
But can US and European polysilicon manufacturers compete on cost alone? No, and as a result, established players are forming joint ventures with downstream businesses to ease pricing pains.

More joint ventures and vertical integration are inevitable, but Colville reckons that established US and European manufacturers can still differentiate themselves on quality. “There has to be low cost at sufficient quality; polysilicon production is not something you learn overnight,” he says.

Feinstein agrees these firms can focus on quality, but is adamant the 'bottom line' is still cost. And as he points out: “Chinese players are actually very concerned with quality and are doing everything they can to prove the quality of their panels is just as good - if not better. US and European players say panels built in China are low quality, but this holds no weight. Asian manufacturers are certified with the bodies they need to be certified with and the banks are willing to put their money behind them; that's good enough.”

Admittedly these companies win more business when polysilicon prices are high, but they still boast disruptive technologies that could one day slice production costs in half, relative to energy-intensive crystalline silicon cell manufacture. As such, Feinstein is confident that the US will continue to offer domestic support to its solar companies, and wryly highlights how polysilicon production in China is fast re-locating internally; low cost manufacturing - even when heavily subsidised - cannot take place without the cheaper, more reliable electricity supplies.

But what of the subsidies? Feinstein believes Asia's generous solar subsidies will continue for some time yet, while funds could dwindle sooner in Europe and North America. 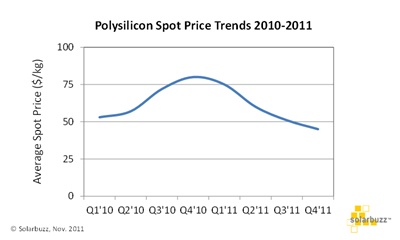 Only time will tell if the US Department of Commerce answers SolarWorld's demand for tariffs on Chinese imports, but, levy or not, manufacturing still looks set to move to Asia. As Feinstein emphasises, these polysilicon manufacturers may be pricing the likes of Solyndra out of the market, but they are also helping to drive uptake by making PV more competitive with conventional sources of power generation.

Price wars aside, the industry can expect a battle of technologies. Solar businesses that use raw materials other than polysilicon are working hard to preserve margins and as Colville points out, strong investments are still taking place outside Asia with the long-term goal of cutting prices by moving to solar technologies that use less silicon.

“Thin-film silicon technologies are fighting to demonstrate volume production,” he says. “If this happens, North American and European companies could suddenly play a significant part in the photovoltaic industry.”

Rebecca Pool is a freelance technology journalist based in Boston, UK.