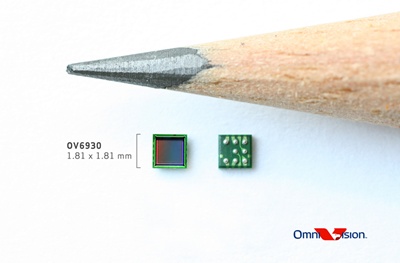 Omnivision, the US-headquartered company that produces hundreds of millions of CMOS image sensors for a wide range of applications each year, says that a sharp slowdown in sales will continue through the rest of this year following what it called “unexpected cutbacks” in customer orders in the latest quarter.

For its second quarter of fiscal 2012, which ended October 31, Omnivision posted revenues of $217.9 million – down more than 20% sequentially. And that trend is continuing: the company predicted that its third-quarter sales will be down by a further 20%, to between $160 million and $180 million.

The slowdown has been brought about by reduced orders across the company’s key application markets of mobile handsets, tablet and notebook PCs, and webcams. The mobile handset market is by far the most dominant applications sector, typically accounting for around two-thirds of company revenues, and there has been widespread speculation in recent months that Omnivision had lost business from key player Apple.

While the tablet and emerging “ultrabook” PC sector offer potential for strong growth in the near term, Omnivision will also be looking to markets outside of consumer electronics to drive its business forward in the longer term.

And the prospects here look good. According to a June 2011 market report by Japan’s Techno Systems Research (TSR), the automotive, security and medical sectors will all provide fast-growing markets for CMOS sensors – the technology that Omnivision pioneered in the 1990s.

TSR expects the market for image sensors used in security and surveillance to grow by 57% between 2010 and 2015, with CMOS devices taking an increasing share from CCDs – mirroring the trend seen in all but some of the highest-end scientific applications – as demand for high-definition closed-circuit TV increases.

In automotive, TSR says that CMOS sensors will capture virtually the entire market by mid-decade, as applications such as 360 degree, rear-view and lane-departure imaging features increasingly appear inside vehicles. Unit shipments of CMOS devices in automotive applications will grow rapidly, from 6.7 million units in 2010 to nearly 50 million units in 2015, TSR forecasts.

Improved colonoscopy
And Omnivision has been talking up the medical sector too, where the market for image sensors is expected to triple between 2010 and 2015. In the company’s latest conference call, VP of marketing and business development Hasan Gadjali said that the OV6930 sensor used in advanced colonoscopy is now shipping in volume to more than one customer.

The OV6930 has also recently featured in a high-profile study of new colonoscopy equipment, the “Third Eye Retroscope” made by Avantis Medical Systems. Studies show that the device improves the detection rates for pre-cancerous adenoma polyps in the colon.

Colorectal cancer represents the second-leading cause of cancer deaths in the western world, with more than 400,000 cases reported annually across Europe and a further 150,000 across the US. Clinical studies have now shown that the disposable Avantis camera, which is inserted through a standard colonoscope to give physicians a backwards-looking view of the patient’s colon, gave particularly good results for higher-risk patients undergoing colonoscopies following earlier adenoma removal.

The results of a randomized clinical evaluation of the technology performed across nine sites in the US and Europe, published in the journal Gastrointestinal Endoscopy earlier this year, showed that the retroscope could detect more than 20% additional pre-cancerous adenomas than the conventional technique – largely because many polyps tend to be hidden behind folds in the colon and harder to see with a forward-looking camera as it travels through the body.

“The substantial and statistically significant improvement in adenoma detection rates provided by Third Eye colonoscopy for these [higher-risk] groups points to a strong recommendation to use the device on all surveillance and diagnostic colonoscopy patients,” commented Avantis Medical Systems’ chief medical officer Jack Higgins, MD.

Despite its overall sales decline in the latest quarter, Omnivision remains one of the leading producers of imaging sensors worldwide. In its most recent fiscal year, the company shipped 681 million units - bringing cumulative sales to more than 2.5 billion units inside ten years.

In the market for CMOS image sensors, the company claims a market share of around 30%, and that overall market is expected by TSR to grow from 2 billion units this year to 3.2 billion in 2015.