Andor Technology, the manufacturer of high-end cameras, is setting a course for rapid expansion over the next five years, thanks to £18 million of new investment.

The Northern Ireland company has just posted record figures for annual sales and profit, and the investment is intended to double its turnover in just five years as Andor increasingly targets the mid-price camera market.

For the year ended September 30, the Queen’s University, Belfast, spin-out reported a pre-tax profit of £9.7 million on sales of £57.4 million – both figures up by more than 30% on the previous year.

The increase in business extends a remarkable period of expansion over the past 14 years – the company was founded in 1989 – in which, says chairman Colin Walsh, Andor has delivered compound annual sales growth of 30%. The latest stage of that success story has been driven in large part by government spending on science through stimulus programs:

“In our US and European markets, economic stimulus expenditure into research and development has driven investment in new scientific instruments that enables researchers to see things in finer detail than ever before,” wrote Walsh in his statement accompanying the results. “This in turn drives development within our OEM customer base, where our cameras are deployed in new applications for life sciences and elsewhere.”

Contrasting that success with the difficulties faced by the wider UK economy, Walsh added: “Few other businesses can claim to have grown revenue and profit so convincingly in what remains an uncertain economic environment.”

The chairman also reported that the Andor board remained confident about the company’s prospects in 2012, despite the macroeconomic worries driven by the eurozone debt crisis. That confidence will be partly borne from a 26% increase of order intake seen in fiscal year 2011.

Video: image sequences captured by Dr. Satoshi Nishimura from the Department of Cardiovascular Medicine at the University of Tokyo, using an Andor iXon3 EMCCD camera and a Confocal Spinning Disk Unit:

Expansion plan
CEO Conor Walsh highlighted that the growth was seen right across the business and all geographies, with systems sales rising fastest and more than doubling year-on-year. He said that the company would shortly complete a £1.5 million investment designed to increase capacity and provide space for close to 70 additional researchers and engineers. Andor has also upgraded its clean room facility, so that the entire space is now at Class 1K levels.

“At the current rate of increase of headcount we will need further investment in facilities in the coming years and we are already at an advanced stage of planning for the next phase of expansion,” said the CEO.

That plan now looks to be in place, with Invest Northern Ireland offering the company a £1.5 million grant and potential further support, as part of a wider £18 million investment by Andor.

Northern Ireland’s Enterprise Minister Arlene Foster said that the investment would mark the company’s strategic transition from a company focused on high-end cameras for niche and specialist applications to one with broader scope and looking to capture a share of the much larger mid-price market.

The investment is expected to comprise both an upgrade of Andor’s existing facilities and the acquisition of other buildings in the Springvale Business Park where the firm’s headquarters are located. But that isn’t all, as Conor Walsh explained:

“Our ambitious strategy for growth over the next five years now includes acquisitions and targeting new market sectors. This investment is the next step in the process and Invest NI’s support will be invaluable in helping us to ramp up production levels and quickly take advantage of market opportunities.”

The CEO added that a series of new products scheduled for release in early 2012 would underpin performance for the forthcoming financial year, while stressing that the company would be able to cope with any fluctuations in market conditions: 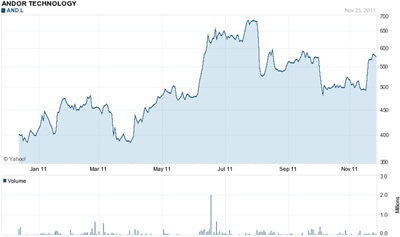 "We have never allowed ourselves to take the short-term view, and our continued investment in people, facilities and products is a testament to our long-term confidence," he concluded. "We understand that science is at the heart of our success and innovation is what delivers our performance."

Aside from its own expansion plan, the company will also establish the Andor Learning and Development Academy with support from Northern Ireland’s Department for Employment and Learning, which will provide money to help Andor develop training courses and materials.

• Andor’s stock price fell by around 5% on the London Stock Exchange following the latest results announcement, but it remains solidly up on the year at around 550p, compared with 400p a year ago.