Start-up attracts investment from energy giant Enbridge and will demo its CPV technology for the US government's defense department. 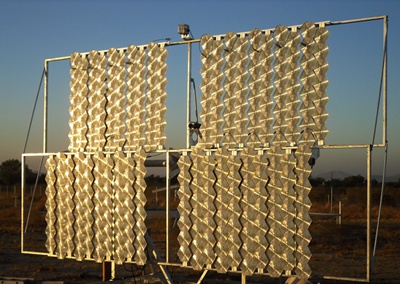 Concentrating photovoltaics (CPV) specialist Morgan Solar has closed the second tranche of a $28.8 million funding round, while the Toronto-based company is also set to demonstrate its technology through a US Department of Defense (DoD) scheme.

Significantly, the series B equity financing round now includes $9.8 million from Enbridge (Morgan Solar announced in May that it had closed a $16.2 million initial tranche).

The Canadian energy company is among North America’s largest transporters and distributors of crude oil and natural gas (Enbridge currently claims to deliver more than 400 billion cubic feet of natural gas to customers each year), but it is also establishing a portfolio of utility-scale renewable energy projects, including one high-profile solar farm.

The Sarnia Solar Project, in which Enbridge collaborated with thin-film CdTe company First Solar, is currently one of the world’s largest operational PV facilities with a peak generating capacity of 80 MW. However, the Morgan Solar deal represents a first for the company, according to the its VP of alternative and emerging energy Chuck Szmurlo:

“While Enbridge is now well established as a generator of solar electricity, our investment in Morgan Solar is our first investment in solar technology,” he said. “We’ve been excited for a long time about the potential for solar electricity, and we’re now pleased to help advance innovative ideas that will help reduce costs and enable the increasingly economic deployment of this emissions-free energy source.”

Morgan Solar’s key innovation is an optical one. In fact, the start-up describes itself as, fundamentally, “an optical technology company”. Its “Sun Simba” 10 kW tracker uses a light-guide solar optic that is said to enable a low-profile, lightweight CPV system that is cheaper to build, ship and deploy than those of its competitors.

Patented technology
The patented planar light guide uses total internal reflection to trap light inside a transparent panel. “This allows for very thin modules whose thickness is comparable to the height of the solar energy collector, and eliminates the depth requirements inherent in traditional concentrated photovoltaic solar energy systems,” says the company, whose key intellectual property is covered by US patents 7,991,261, and 7,873,257.

On its web pages describing the technology, Morgan Solar says that as well as eliminating much of the material cost common to most CPV designs, the optical alignment in its system is unaffected by thermal expansion. “Heat is dissipated without the need for expensive or sophisticated cooling systems, and extra protection or enclosures are unnecessary,” it claims.

The light guides are manufactured through a partnership with the precision injection molding company Nypro – also an investor in Morgan Solar, and a participant in both the firm’s funding rounds to date. Spanish wind energy giant Iberdrola was another high-profile company to reinvest in the series B round, which included first-time investor The Frost Group and brought total private investment in the firm to $38 million since its 2007 founding by optics specialist John Paul Morgan. 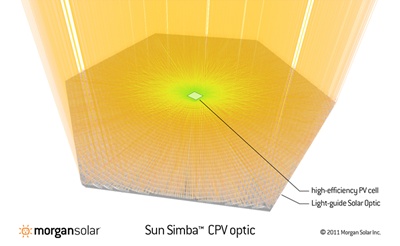 Morgan Solar says that it will use the new funding to expand manufacturing capacity of its Sun Simba optical assemblies, invest in sales development and to expand its portfolio of future solar technologies.

Meanwhile, the company has been selected by the US Department of Defense to demonstrate its CPV technology in one of 27 new military installations, through the DoD’s 2012 Installation Energy Test Bed Initiative.

Also selected under the same program is the Californian company Cogenra, which has developed a hybrid PV and solar water heating system. The start-up, which has been shortlisted for a 2011 Prism Award and is currently working on an installation at Facebook’s new Menlo Park campus, will install demonstrators at naval bases in its home state.