'Only the fittest' to survive solar shake-out

The photovoltaics industry is about to get Darwinian, with only a handful of mainstream players to survive, suggests a Swiss bank. 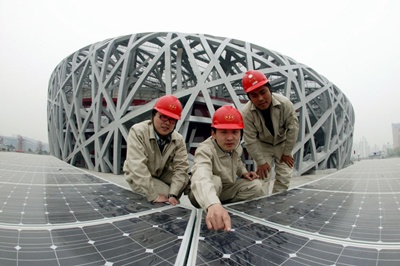 As prices continue to fall in a fiercely competitive photovoltaics (PV) market, a new “fitness” study by Switzerland’s Bank Sarasin suggests that only a few companies will emerge from a period of Darwinian consolidation.

Earlier this week, number-one PV module Suntech Power announced that it was expecting at least six months of serious consolidation in the sector, with CEO Zhengrong Shi saying that to “recalibrate” supply and demand, he believed that the industry need to go through a process of “capitulation, liquidation and consolidation”. With more than 300 cell and module makers, Chi said that many will exit to leave only a small group of competitive manufacturers.

The Sarasin analysis, authored by Matthias Fawer and Balazs Magyar from the Basel-based private bank, concurs with that view. They see China-based Suntech as one of the best-positioned companies, alongside US-based First Solar and Germany’s SolarWorld. They also place SunPower, Trina Solar and Yingli Solar in a six-strong category of “industry leaders” that are set to capitalize on the next stage of growth in the PV market – from 2013 onwards – as many others fall away.

“A shake-out of the solar industry in inevitable, as the imbalance between production capacities and demand has become too great,” they say, pointing to some 50 GW of module capacity to service a market less than half that level this year. "Only the fittest will survive," Fawer and Magyar warn. "Small and uncompetitive companies which are inadequately financed will not survive."

Tough 2012
While 2012 will be an extremely tough year for the PV industry, particularly in Europe, the Sarasin analysts do see a return to growth as a result of demand from the US, China and Japan. “During the period 2010 to 2015 global installations will grow annually by an average of 18%,” they write. And while India will grow strongest, Europe’s solar market – thus far the major driver of the industry - will shrink by approximately 3% a year over the same period.

Suntech’s Shi does expect demand growth to return by the middle of next year, but the stagnating European market will be accompanied by a reduction in European manufacturers. The Sarasin team expects only a handful of German companies to survive the shake-out:

“The companies under the most threat are mainly small to medium-sized companies with comparatively modest growth prospects, such as Germany’s Conergy, Q-Cells, Solar-Fabrik and Sunways,” they predict.

Of those companies, which Sarasin rates as “laggards” in its PV company fitness assessment, Q-Cells in particular is facing short-term difficulties. It is due to repay a €200 million convertible bond at the end of February 2012, but has seen its cash reserves rapidly diminish this year in the face of a slow domestic market and the fierce competition. To compound those problems, the company’s CFO Marion Helmes resigned on the same day that Q-Cells issued its latest quarterly results.

Much of that competition is of course a result of a price collapse driven in part by huge increases in capacity at Chinese manufacturers. And although three of the six companies expected by Sarasin to emerge from the shake-out as industry leaders are from China, many of the country’s suppliers will also be swallowed up.

Jinko Solar and LDK Solar are ranked in the “midfield” of companies that should survive, but Sarasin identifies China Sunergy, JA Solar, ReneSola and Solargiga Energy in the “laggards” bracket.

Positive impact
On a positive note, Sarasin stresses that the shake-out will ultimately be beneficial for the industry, improving growth prospects and maintaining a drive towards cost reduction and genuinely competitive pricing when compared with conventional energy sources.

“Over the past ten years, PV has achieved the steepest cost-cutting rate of all forms of renewable energy, and is therefore rapidly reaching a competitive price level,” they conclude. “In the next few years, solar power will achieve price parity with the end-user tariff in more and more regions. As a result, solar energy will no longer be dependent on national subsidy programs.”

Suntech’s CEO also predicted earlier this week that price parity with wholesale electricity could be achieved in the US within five years. “As government utility development and investors recognize the progress that solar has made, we will see a new long-term period of solar progress,” Shi told investors.

The drop in prices has also meant that PV is now much more competitive than concentrating solar power (CSP) installations that convert heat from sunlight into electricity by generating steam (as opposed to concentrated PV systems, which convert sunlight directly into electricity using semiconductors). That is because a CSP installation is a much more material- and labor-intensive process, meaning that costs are more difficult to reduce.

Among manufacturers of thin-film PV technologies, an industry shake-out is already under way, with Sarasin estimating that the number of companies active in the sector has dropped to 100, from 150 just a year ago.

As with the mainstream silicon PV sector, a handful of leading companies will emerge to dominate thin-film PV, and by 2013 Sarasin expects the ten leading firms to have minimum production capacities of 500 MW each.

“Boosted by large, financially strong corporations such as First Solar, Sharp, ShowaShell, GE and Hanergy as front-runners, thin-film technologies should be able to achieve average annual growth rates of 32% up to 2013,” reckons the Swiss bank.