Germany cuts support by 15% from start of 2012, while the UK proposes a 50% cut for small installations taking effect from next April. 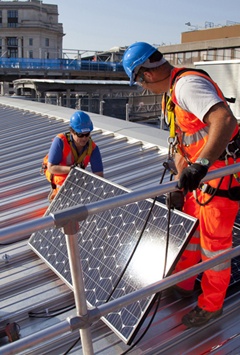 Feed-in tariff support for new domestic photovoltaic installations will be slashed in the UK and cut significantly in Germany next year, as governments in both countries adjust their incentive mechanisms in response to strong uptake of the technology and falling PV module prices.

Germany, historically the largest PV market in the world by far, will cut support by 15% from January 1, 2012 under its flexible cap system – meaning that operators will receive between 17.94 and 24.43 eurocents per kWh fed into the grid.

The cut is a response to the 5.2 GW (peak output) installed in Germany over the past year, more than the 4.5 GW threshold that was set to trigger the decrease automatically. If the scale of installations had exceeded 5.5 GW, an 18% cut would have been triggered.

Even though total installations in the country are down significantly on the 7.8 GW constructed during the comparable period between October 2009 and September 2010, Germany remains the world’s largest PV market.

Meanwhile the UK, which has a far less developed PV market than Germany, is set to slash its support for small installations by more than half. Such has been the popularity of the technology that the country’s Department of Energy and Climate Change (DECC) says that changes to the original feed-in tariff must now be made to keep the budget allocated to it under control.

“No option”
In its proposed new scheme, UK support for new domestic-scale installations of less than 4 kW are set to receive a maximum of only 21 p per kWh support (approximately equivalent to 24 eurocents) from April 2012 onwards, down from a maximum 43.3p currently. Existing installations and those deemed eligible on or before December 12 will continue to receive the more generous level of support.

“The plummeting costs of solar mean we’ve got no option but to act so that we stay within budget and not threaten the whole viability of the FITs scheme,” said DECC Minister Greg Barker in a statement announcing the proposed reduction and an associated consultation.

“Although I fully realize that adjusting to the new lower tariffs will be a big challenge for many firms, it won’t come as a surprise to many in the solar industry who’ve themselves acknowledged the big fall in costs and the big increase in their rate of return over the past year,” he added.

The DECC says that the average cost of a domestic PV installation has fallen 30% since April 2010. Further falls can be expected following the sharp drop in the wholesale price of crystalline silicon cells and modules throughout much of this year, but the magnitude and sudden nature of the cut in support has already been criticized by many in the UK’s PV industry, who say that the change will “kill off” the sector.

Consultation
The DECC’s consultation will also propose that homes would have to reach a certain level of energy efficiency performance before they can become eligible for the new tariff scheme.

The nascent UK market for PV has boomed since the original feed-in tariff was introduced by the previous government in early 2010. According to DECC’s statement a recent surge has seen more than 16,000 separate installations in September 2011 alone. “Nearly three times as much solar PV as projected has so far been installed,” it said, pointing out that the total had now reached more than 400 MW in peak output capacity.

Though larger than expected, that scale remains tiny when compared with cumulative installations seen in Germany. According to figures from the European Photovoltaic Industry Association (EPIA), Germany had reached just over 17 GW in PV installations by the end of 2010, and that will likely reach in the region of 21 GW at the end of this year.