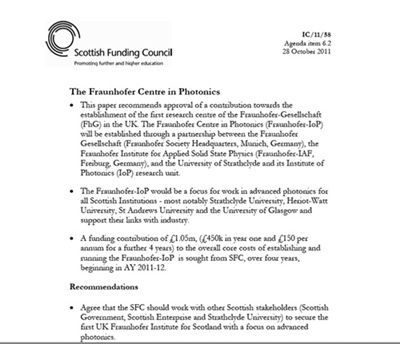 by Matthew Peach
The likelihood of the Fraunhofer organization establishing an institute for applied photonics in Glasgow – perhaps as soon as early 2012 – appears to be growing, according to presentations at a recent UK photonics industry workshop in the city and a funding proposal by the Scottish Funding Council.

The Glasgow Fraunhofer, which has been under consideration for several years, would be a partnership between the German research body and key organizations including the Scottish Government, Scottish Enterprise and Strathclyde University.

optics.org understands that a formal announcement clarifying details of location, management structure and research objectives will be made around the end of 2011.

On October 28, the Scottish Funding Council, the strategic body responsible for funding of teaching, research and other activities, published a paper recommending approval of a £1 million-plus contribution towards the establishment of the first research center of the Fraunhofer-Gesellschaft (FhG) in the UK.

It continues: “The Fraunhofer-IoP would be a focus for work in advanced photonics for all Scottish Institutions - most notably Strathclyde University, Heriot-Watt University, St Andrews University and the University of Glasgow, and support their links with industry.”

The SFC’s proposed funding contribution will be £1.05 million, (£450k in year one and £150k per annum for a further four years) to the overall core costs of establishing and running the Fraunhofer-IoP, beginning in financial year 2011-12.

Potential TIC impact
The possible impact of the proposed photonics-related Fraunhofer in Scotland was considered at a recent meeting to discuss the potential development of a dedicated photonics Technology & Innovation Centre (TIC) in the UK. That meeting took place at the IET Teacher Building in Glasgow, on October 25, and was hosted by the Electronics, Sensors and Photonics Knowledge Transfer Network (ESPKTN).

In a three-hour open session attendees considered questions such as: “What should a Photonics TIC do? In which market and applications areas should it focus? Should photonics and sensors combine in a joint TIC? And, if a Fraunhofer in photonics were established in Scotland, what would be the implications for a TIC in photonics?”

The UK government’s Technology Strategy Board is creating a new network of at least six TICs, and has already selected three. The first, which is dedicated to high-value manufacturing, officially opened for business in October, with two more - in offshore renewable energy and cell therapy – announced earlier this year. Photonics is one of ten candidate areas in the running for the three remaining TICs, with selections expected by early next year. 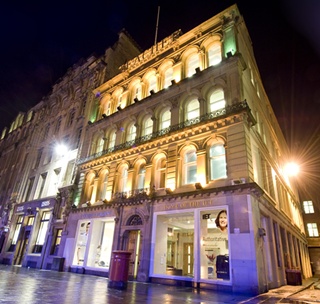 Close co-operation
A Scottish outpost of the Fraunhofer organization dedicated to photonics – provisionally called the Fraunhofer institute of Applied Photonics – was actually proposed before the UK Government decided to launch the TICs.

John Lincoln, network manager of the South of England Photonics Network and a seasoned photonics consultant, attended the meeting in Glasgow. He commented, “It would be constructive for any such UK-funded photonics TIC to work in close co-operation with all other UK photonics interests including a Scottish Fraunhofer institute.”

"Given that a Scottish Fraunhofer now looks likely it would clearly make sense that any photonics TIC should be somewhere else – possibly in Southampton or perhaps Surrey – to ensure uniform geographical coverage," suggested Lincoln, although that is not a universal view. "Obviously photonics is a much wider subject than could be covered by just one center," Lincoln added. "There are at least six [photonics-related] Fraunhofers in Germany."

Commenting on the likely scope of a photonics TIC, Lincoln explained, "The TICs are not designed to be for fundamental research; they are developmental centers to fill the perceived innovation gap [that] has been created by the loss of the UK’s central research laboratories."

In its September 2011 report Photonics TIC Consultation, published on behalf of the Technology Strategy Board, the ESPKTN highlighted seven key areas of photonics that could provide a focus for a potential TIC. These are: optical communications; solid-state lighting; defense and security; laser materials processing; healthcare and biophotonics; sensors and imaging; and energy.

Lincoln sees the biomedical, sensing and materials processing topics as having the best prospects, because of the UK’s existing expertise and resources in those sectors.

Fraunhofer innovation
The Fraunhofer Society is a German research organization with at least 60 institutes across Germany, focused on different fields of applied science. It employs around 18,000, mainly scientists and engineers, with an annual research budget of about €1.65 billion. Some basic funding for the Fraunhofer Society is provided by the state but more than 70% of the funding is earned through contract work, either for government funded projects or from industry.

The organization already has seven centers in the United States, under the name Fraunhofer USA, and three in Asia. In October 2010, Fraunhofer announced that it would open its first research center in South America.