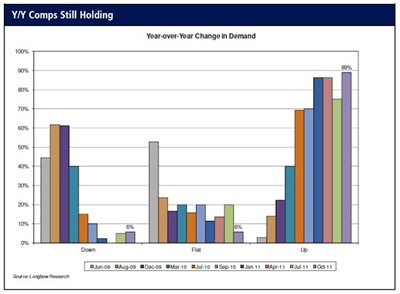 by Tim Hayes
The switchback moodswings of the lasers and optics sector moved back in a positive direction in Q3 2011, as the damage caused by the previous quarter's economic turbulence failed to lead to a catastrophic drop-off in demand for most vendors. Other causes for concern continued to loom large, however, not least the economic health of Europe.

Sequential demand presented a rather more mixed picture. Thirty-five percent saw an increase, a modest improvement from the 33 percent who did so in Q2. But several vendors previously seeing flat sequential demand reported that things were now worse: those experiencing lower demand rose from 14 to 24 percent, while the number seeing no change fell from 52 percent to 41 percent.

Despite the financial bruises, most vendors remain optimistic. Sixty-seven percent of Longbow's contacts feel positive about 2012 while only four percent feel negative, with orders and backlog providing some comfort that 2011 will end strong.

Investment cycles
Longbow's Mark Douglass noted that the resilience in year-on-year figures reflected continued brisk expenditure in the manufacturing sector, while the variations in sequential demand were more dependent on end-market exposure.

"The change in mood since the previous quarter is largely due to most vendors experiencing continued momentum despite the continued barrage of negative news," Douglass told optics.org. "The Q2 survey was taken when fears over a European recession began to take command of the headlines again, and so there were rightly some worries among vendors. But now, another quarter has passed with the same negative headlines and a plummet in the [equity] market[s], and demand is still OK."

Automotive continues be strong for US vendors, as well as for some of the European manufacturers which have made some sizable system orders. Laser expenditures for automotive fuel cell applications seem to be leveling off, along with general steel markets, and some vendors believe that demand from Asia is weakening.

"Vendors tied to more industrial operations are still feeling good, as end markets such as oil and gas, automotive, and agriculture are generally cash-rich and willing to invest," summarized Douglass. "The technology sector has a much shorter cycle in investment spending, and that cycle is beginning its decline."

Fiber laser pricing
Growth in the fiber laser sector continues to outpace that of CO2 systems, and IPG Photonics retains its lock on high-power fiber laser sales. The barrier to broad adoption remains the price premium charged for the fiber laser systems, which can potentially outweigh the operational cost savings.

Longbow's survey detects signs that after years of aggressive cuts, the price of IPG's high-power lasers have leveled off, and in some cases increased slightly. "My interpretation is that internal cost cutting, which I understand IPG is still aggressively pursuing, may have hit an asymptote," commented Douglass. "Was the 'Moore’s law' for its internal diode lasers sustainable? It could also be that there are further opportunities which IPG has not yet rolled out, and that the company is keeping prices stable in the meantime." 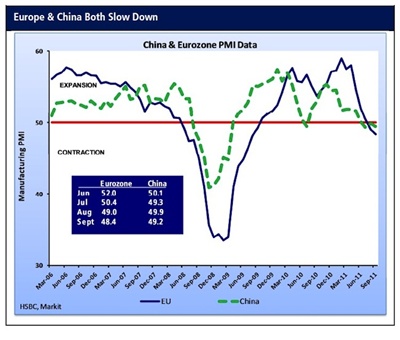 As yet there have been no further movements from IPG's competitors in the fiber laser sector following the company's victory in its protracted patent battle with IMRA. Douglass believes that the Fall trade-show season may yield some developments on this front.

European worries
In line with the swing towards vendor optimism, US industrial production rebounded slightly during the quarter. The US PMI reading, a general measure of economic health, increased to 51.6 in September from 50.6 in August, indicating an economy expanding at an increasing, albeit modest, rate.

Things were less rosy in other parts of the world, with the Eurozone PMI falling to 48.4 in September from 49.0 in August, compressing economic growth and further highlighting Eurozone fears. China also showed a sequential decline to 49.2 in September from 49.9 and a further slip into negative growth territory.

"Europe has always been a concern to US vendors and with these figures it remains so," noted Douglass. "The real concern is German production and PMI, as that country is clearly the main driver for industrial capital goods in Europe."