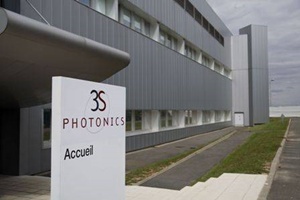 The France-based optoelectronic component maker 3S Photonics is set for expansion following major new investment from Eurazeo. The family-owned private equity business is taking a majority shareholding in the company following a total investment of €37 million, while significant funds are being provided for 3S to execute its expansion plans.

Eurazeo says that €10 million of its capital injection will go to support the growth strategy, which will likely see 3S Photonics diversify its offerings outside of its core telecommunications market. The deal values the company – which posted sales of €51 million and an EBIT of €3.8 million in the year ended June 2011 - at around €46 million.

3S, formerly the optoelectronics manufacturing subsidiary belonging to networking giant Alcatel (before the latter’s merger with US-based Lucent Technology and the sale of Alcatel Optronics to US-based Avanex), manufactures high-specification laser diodes that are used in submarine optical networking applications – and where component reliability is critical. Key competitors here include JDSU and Oclaro.

More recently, the company has also made inroads into the terrestrial market for pump diodes, where specifications are less stringent and the market is more competitive. What is less well-known is that 3S has also been active in the fiber laser market, supplying diode emitters under European development projects and for specialist products such as thulium-doped fibers that emit in the 2 micron wavelength range and are used in medical applications.

Entrepreneur
Alexandre Krivine, the entrepreneur who, along with Didier Sauvage acquired the 3S operations from Avanex in 2007, said of the Eurazeo deal: “We are gratified by Eurazeo’s entry into our capital structure. With their support, we look forward to accelerating our organic and external growth, and seizing opportunities offered by the international consolidation of our industry.”

3S has already been active in that consolidation process, having acquired the fiber Bragg grating (FBG) manufacturer Avensys back in early 2010. In May this year, 3S also attended the LASER: World of Photonics event for the first time, signaling a growing interest in photonics applications outside of the telecommunications space.

That doesn’t just include industrial laser applications. 3S is also targeting the medical sector, where fiber lasers are starting to find uses in ophthalmology and dermatology, it says. FBG-based mechanical sensors for civil engineering applications, and fiber-laser target designators, rangefinders and directed-energy weapons are also seen as areas for expansion. 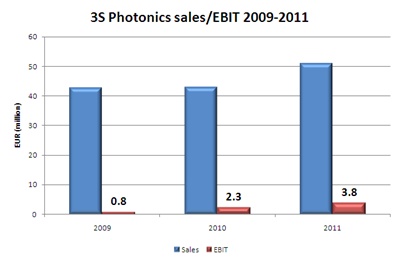 The future strategy for 3S also calls for a move up the value chain from photonic components to system-level offerings, although the company told optics.org earlier this year that this would more likely be in niche fiber laser applications – given the dominance of IPG Photonics and likely fierce future competition in the industrial fiber laser sector.

Following Eurazeo’s investment, the private equity firm will own 83% of 3S, with CEO Krivine retaining much of the remaining equity. Krivine and the company’s management had previously owned close to half of 3S Photonics.

He will remain CEO of 3S, while Eurazeo will appoint three of the five members of the board of directors. The transaction should be completed by the end of the year, Eurazeo says. The 3S deal is the second acquisition in the private equity company’s “Croissance” (growth) initiative, which is focused on small- and mid-cap investments.