After posting record orders and its second-best sales ever, the laser systems company remains confident amid the macroeconomic gloom. 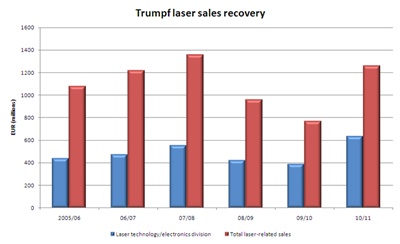 Nicola Leibinger-Kammüller, the president of major laser system and machine tool vendor Trumpf, has added her voice to the call urging Europe’s politicians to resolve the Eurozone currency and debt crises as soon as possible.

Announcing details of Trumpf’s second-best-ever year for sales, and record order intake, Leibinger-Kammüller said: “The Euro crisis and the Greece problem now have to be solved quickly, efficiently and sustainably. Each week without any tangible result will only make markets more insecure.”

The Ditzingen-based company registered a 51% increase in total sales for its fiscal year 2010/11, reaching just over €2 billion. Its laser technology and electronics division, which is dominated by laser sales, registered even faster growth, with revenues up 63% on the prior year to €633 million and accounting for more than a quarter of the company’s total sales for the first time.

While Trumpf has initiated new flexible working arrangements for its employees in Germany that will help the company to react to any future crises in rapid fashion, Leibinger-Kammüller is still confident of a solid performance this year. After orders of €2.2 billion were received in 2010/11, she said: “We are convinced that we will remain on course for further growth in fiscal 2011/12.” In its annual report for 2010/11, the company predicted sales growth of about 20%.

Rapid laser market growth
Trumpf’s largest division remains machine tools, in which lasers play a key role, and where sales also jumped sharply - up 53% to €1.62 billion. “This trend was driven mainly by an extraordinarily strong and continuous investment climate,” the company said in its annual report. “Our 2D laser flatbed machines were a main contributor to this increase in sales.”

In its laser technology division, which is headed up by Peter Leibinger from the family-owned company, Trumpf highlighted that the biggest growth driver was solid-state lasers, with marking lasers and CO2 laser systems also registering strong performance.

Combined laser-related sales from both its machine tool and laser technology divisions reached €1.26 billion in the year, the firm stated, representing the second-highest figure ever behind the €1.36 billion posted in 2007/08, and up from €771 million in 2009/10.

In fact, demand for lasers grew faster than Trumpf had expected. The company believes that the overall market for laser systems used in materials processing applications rose 56% in 2010 to €5.9 billion – of which €4.4 billion related to laser macro systems such as metal cutting and welding. The market for laser systems used in microelectronics applications – including flat-panel display and solar cell production – grew even faster, up 89% to €1.6 billion, it said. 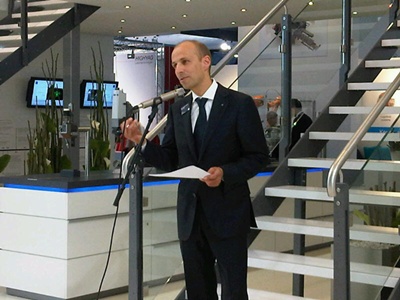 Automotive role
“The laser market emerged from the economic crisis in an extraordinarily strong position,” Trumpf said, citing Asia and Germany as the two key centers of that recovery. “The heavily expanding automobile industry played a major role here.”

One example of greater traction for laser processing in the automotive sector is the emergence of hot-formed car body parts, which reduce vehicle weight and are said to also improve crash protection. For this process, Trumpf has developed a machine tool that uses a high-power disk laser.

Among the myriad microelectronics applications for laser systems, Trumpf highlights the potential for ultrashort-pulse lasers in smart phone manufacturing. One key trend here revolves around the glass used in touch-screen handsets and tablet devices. Manufacturers want to use thinner glass to continually reduce the weight of these products, but cutting such thin glass is extremely difficult with conventional methods.

Speaking at the International Laser Marketplace conference in Munich this summer, the Lumera Laser CEO Achim Nebel said that glass thinner than 300 micron could not be cut effectively with traditional diamond tools, and that this provided a “huge” market opportunity for picosecond lasers. Both Trumpf and Lumera also see growing applications for picosecond lasers in solar cell production, for example in ablation and module connection.

Shanghai expansion
With China now representing such a key market for lasers in production tools (in 2011, the country will be the company’s third-largest market, worth €171 million), Trumpf is currently expanding its tool factory in Taicang, near Shanghai, in anticipation of future demand growth. It is adding 10,000 m2 of space to an existing 13,000 m2 production site, where it produces TruLaser 3030 laser flatbed machines. The development is set for completion in spring of 2012.

Meanwhile, all Trumpf employees that were previously based at the company’s Fukushima location in Japan have been offered continued employment in Yokohama. Trumpf concentrated its activities in the country to the site near Tokyo following the March earthquake and tsunami that triggered the damage to nuclear reactors in Fukushima.