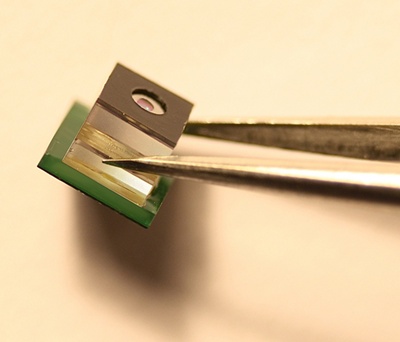 A Moroccan company that specializes in the production of wafer-level cameras is expanding into Korea in a bid to target a growing market for the optical technology.

Nemotek Technologie, based at the Rabat Technology Park, close to the Atlantic coast of the North African country, produces the optical components under a non-exclusive license from the micro-optics developer Tessera.

It is opening a new sales operation in Korea in partnership with Saram International, which will act as its representative and distributor in the country as the two companies target applications in mobile phones, the automotive industry, security and medicine.

The agreement is driven primarily by the rapid growth of the high-tech sector in Korea, where companies such as Samsung and LG have become world leaders in a variety of consumer electronic applications and smart phones in particular.

"Our partnership with Saram will expand our full line of wafer-level solutions in Korea as well as complement our existing growth efforts in Asia, which includes Japan, Taiwan and China," said Hatim Limati, VP at Nemotek Technologie. "We look forward to working with Saram and targeting new opportunities for wafer-level cameras in Korea and enabling customers to take full advantage of Nemotek's offerings."

Non-exclusive license
Though it has a non-exclusive license from Tessera, Nemotek told optics.org that it is able to differentiate itself by providing a full custom service, including expertise in optical design. “Nemotek goes the extra step to exceed customer requests with high-quality products and we make it easier for customers to obtain what they need from one source,” the company said.

“Our customers can obtain just wafer-level packaging, or just the optics, or the complete packaged camera offering, including testing. They can come to us and obtain all they need for wafer-level cameras.”

Established as recently as May 2008 and funded by Morocco’s Caisse de Dépôt et de Gestion, Nemotek already boasts a wafer fab, which opened in June 2010. Although the company wouldn’t divulge any details of current capacity or production levels, the fab does offer through-silicon via (TSV) processing to produce more sophisticated wafer-level components. One example of its expertise is the production of lenses featuring a wider field of view for mobile handset applications.

“To be the newest wafer-level fab [in the Mediterranean] is a tremendous accomplishment for our team as we continue to push industry standards to improve image quality. It is because of our location that we are able to take advantage of European technological advancements and add to the supply chain, placing the Mediterranean on the map for the development and production of high-quality lenses.”

“Our market position as a comprehensive wafer-level fab enables our partners, suppliers and customers to work with one source for all their wafer-level needs.”

Since then, Perdrigeat has left the company, with José da Costa Gatta taking over as CEO in September 2010. Gatta previously worked at industrial giants 3M and General Electric, and said on taking over: “The camera lens and sensor market is continuing to evolve at a rapid pace and Nemotek is at the forefront with major investments in new designs and customization for its customers.”

• Tessera is one of more than 1150 exhibiting companies at next week’s Photonics West event in San Francisco, California, and will be showcasing its wafer-level optical technologies at booth #1016.