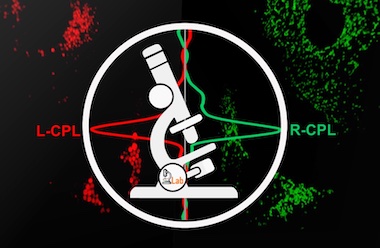 Chirality is a key factor in biochemical reactions, but creating experimental techniques able to distinguish chiral systems in live cells has been challenging.

A project at Durham University has now developed a possible solution, exploiting the way that the circularly polarized light (CPL) emitted by luminescent chiral molecules contains information about the molecular environment, conformation, and binding state.

"This is a significant milestone both in optical microscopy and circularly polarized luminescence research," said Robert Pal of Durham University. "We hope that it will be adapted and used by many researchers world-wide to venture into the uncharted and study fundamental biological processes in a new 'chiral' light."

The breakthrough takes advantage of recent developments in CPL spectrometer technology at Durham, which have addressed the slow adoption of emission spectroscopy methods based on circular polarization due to limitations in available instruments. By using rapid readout solid state devices and a dual channel optical layout, Durham researchers created a platform able to acquire CPL spectra in as little as 10 milliseconds, rather than the minute-scale time periods said to be needed using previous components.

The new study has now extended this approach, applying these rapid CPL measurement capabilities to laser scanning confocal microscopy, so as to simultaneously measure left- and right-handed CPL with confocal sectioning and at high resolution. After initial tests on paper test-targets, to prove that the new platform could successfully employ the updated spectrometry modules, the project applied CPL-LSCM to live-cell imaging of mouse skin cells dosed with suitable enantiomer coordination molecules.

Results showed that CPL-LSCM could simultaneously collect images and differentiate between the left- and right-handed CPL emission arising from the cells, and detect that the enantiomers appeared to localise to different organelles.

The researchers also demonstrated that CPL-active probes can be activated using low energy two-photon excitation, a proof-of-concept result that could in the future allow imaging of living tissues up to one millimeter in thickness with complete CPL spectrum recovery.

These enantioselective imaging results are an important step in live-cell optical microscopy, according to the Durham University team. Incorporating CPL-LSCM into an existing LCSM platform should allow researchers to exploit the versatility of chiral bioimaging, opening new avenues in bioprobe research by enantioselectively targeting and tracking chiral species.

Alongside new studies of chiral interactions in the domains of chemistry and molecular biology, applications in material sciences may also follow. CPL-LSCM should be able to characterize the emissive chiral polymers used in 3D display technologies, or verify unclonable stochastically micro-patterned links created to be CPL-active as a security measure.

"This could trigger a paradigm shift in the fields of molecular cell biology and chemistry," commented the project. "CPL-LSCM will be a vital new tool in optical microscopy, aiding the development of chiral bio-probes to be taken to the next level."