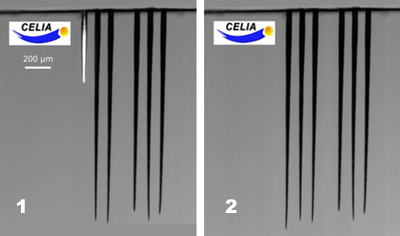 The research group of laser-matter interaction at the Institute of Intense Lasers and Applications (CELIA) at the University of Bordeaux, France, has developed a new glass micro-drilling method using a femtosecond laser in “gigahertz-burst” mode.

Described in the International Journal of Extreme Manufacturing, the process uses a femtosecond laser from Amplitude operating in the gigahertz-burst regime to study a new glass micromachining method, which allows for drilling taper-free, elongated holes with smooth inner walls without any cracks in the glass.

This new laser-matter interaction regime permits to directly drill holes of high aspect ratio in one single step without any chemical etching. The choice of the laser-burst parameters reveals to be very important in order to achieve an outstanding micromachining quality of the machined structures.

The femtosecond laser GHz-burst mode could pave the way for new applications such as microelectronics where silicon interposers are likely to be replaced by glass interposers.

The operating regime of the femtosecond laser in gigahertz-bursts instead of repetitive single pulses enables interaction with the glass material combining two advantages: the laser energy deposition in the material is distributed over a longer time resulting in a highly efficient, controlled cumulative regime, whereas the outstanding micromachining quality of femtosecond laser pulses is conserved. The resulting top-down percussion drilling gives taper-free, elongated, and crack-free holes with glossy inner walls.

CELIA is a centre of excellence in lasers and their interaction with matter. Research is performed on laser development, ultra-short intense laser matter interactions and applications, from the physics of hot dense plasmas to laser-molecule or laser-atom interactions. Three state-of-the art laser drivers based on Ti:sapphire and Yb:fiber feed nine fully-equipped end-stations including secondary XUV and X-ray sources.