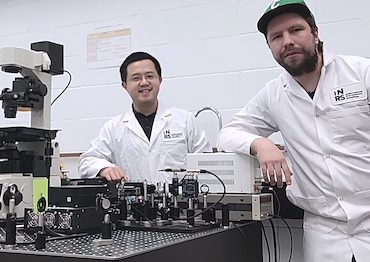 One is enough: INRS single-pixel team

Single-pixel imaging (SPI) and optical platforms based on the principle are attractive as ways to avoid the complexities of 2D CMOS sensors, or for applications where a sensor array is impractical.

They can also allow faster imaging, as in the single-pixel architecture developed by MIT Media Lab in which computational analysis allowed time-resolved lensless imaging in a photography application.

Imaging in SPI platforms usually involves some form of spatial light modulation to structure the light falling on the detector, with computational reconstruction of an image from the time-varying patterns and intensities hitting the single pixel. Similar optical masking approaches have been used with conventional imaging platforms in place of traditional optics.

The INRS team has now demonstrated a modified technique termed single-pixel imaging accelerated via swept aggregate patterns (SPI-ASAP), which combines a DMD with laser scanning hardware. The findings were published in Nature Communications.

In the new platform laser light is modulated by a 16-facet polygonal mirror, rapidly delivering individual encoding masks to the detector. These masks are themselves sub-regions of larger aggregate patterns displayed via DMD, with the system scanning across this larger pattern to deliver sections of it at a time.

"Pattern aggregation enhances SPI data acquisition rates to more than two orders of magnitude above the limitations of DMD-only modulation, while still retaining the high pixel count and flexibility of pattern display," commented the project in its published paper. A compressed-sensing image processing operation can then reconstruct images from the received data.

In the latter case, the 2.5 Hz oscillation of the watch's balance wheel was successfully imaged at a frame rate of 103 fps over a 14 x 14 millimeter field of view, with the image analysis system rebuilding intensity data from points alternately darkened and lightened by the movement of the component under structured illumination.

Across its trials, the project confirmed that the platform was capable of streaming real-time video at 100 fps, while in offline operation imaging at speeds up to 12,000 fps is possible if the data acquisition process is matched to the maximum scan rate of the polygonal mirror.

Enhancements to the DMD and laser scanning hardware should improve performance further, according to INRS, as would next-generation image reconstruction algorithms. However the basic architecture is essentially generic and could be adapted to many different configurations.

"Scientifically, the device could have broad applications especially in the non-visible spectrum where there is no suitable camera," commented INRS. "Very high-speed imaging allows the capture of transient events, such as the analysis of combustion phenomena, the detection of hazardous gases and the characterization of semiconductor materials."