Development of optical combiner with displays firm VividQ touted as a game-changer for nausea-free virtual experiences. 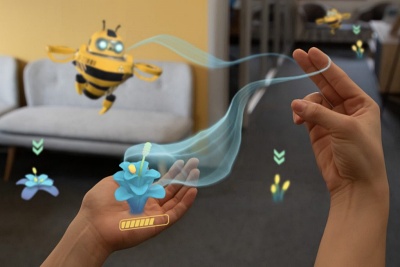 A partnership between waveguide maker Dispelix and holographic gaming display developer VividQ is said by the pair to have delivered a manufacturable optical solution that will improve augmented and virtual reality (AR/VR) experiences dramatically.

The partnership has come up with a so-called “'waveguide combiner” technology, claiming that it can accurately display simultaneous variable-depth, three-dimensional content within a user's environment.

“For the first time ever, users will be able to enjoy immersive AR gaming experiences where digital content can be placed in their physical world and they can interact with it naturally and comfortably,” announced the two firms.

“This will enable headset manufacturers the ability to kick-start their AR product roadmaps now,” they said.

While AR headsets have been developed by the likes of Magic Leap and Microsoft, these typically produce two-dimensional stereoscopic images at fixed focal distances, or one focal distance at a time - with sub-optimal results for many.

“This often leads to eye fatigue and nausea for users and doesn't offer the necessary immersive three-dimensional experiences,” explain the companies. “For example, objects cannot be interacted with naturally at arm's length, and they are not placed exactly within the real world.”

To solve those problems - and make AR suitable for mass-market adoption - headset displays or smart glasses need to mimic the eye’s natural experience with physical objects.

That requires both a sufficiently wide field of view and the ability to focus simultaneously on 3D images at anywhere from 10 cm away to optical infinity.

Dispelix and VividQ say that the waveguide combiner represents the industry's favored method of displaying AR images in a compact form factor, and that their version of the technology - with accompanying software - is optimized for 3D applications like gaming.

‘Problem solved’
VividQ CEO Darran Milne said: “There has been significant investment and research into the technology that can create the types of AR experiences we've dreamt of, but they fall short because they can't live up to even basic user expectations.”

Milne points out that until now the much-hyped AR/VR industry has been unable to overcome a fundamental issue, namely the complexity of displaying 3D images placed in the real world together with a good field of view, a large enough eye-box to accommodate a wide range of IPDs (interpupillary distance, or the space between the user's pupils), and a sufficiently lightweight lens for comfortable wearing.

“We've solved that problem, designed something that can be manufactured, tested and proven it, and established the manufacturing partnership necessary to mass produce them,” the CEO claimed. “It is a breakthrough because without 3D holography, you can't deliver AR.

“To put it simply, while others have been developing a 2D screen to wear on your face, we've developed the window through which you'll experience real and digital worlds in one place.”

The patent-pending 3D waveguide combiner is designed to work in conjunction with VividQ’s software. Both technologies can be licensed by wearables manufacturers for their product roadmaps, with the 3D waveguide manufacturing provided by Dispelix.

Antti Sunnari, CEO and co-founder of the Finnnish firm, said: “For applications such as gaming and professional use, where the user needs to be immersed for long periods of time, it is vital that content is true 3D and placed within the user's environment. This also overcomes the issues of nausea and fatigue.”

• Sunnari will be taking part in a panel session covering the relative merits of different waveguide approaches at the SPIE AR/VR/MR event taking place in San Francisco at the end of this month.

That panel session is scheduled to follow an invited talk by Dispelix CTO Ismo Vartiainen, who will discuss the firm’s technology and design vision.