Technique records luminescence data and converts to temperature in real-time. 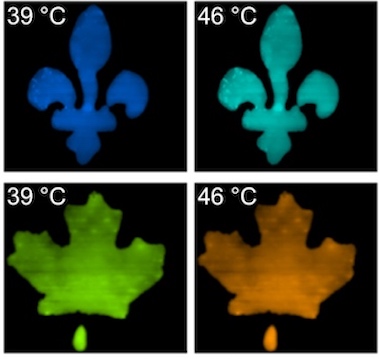 A technique to measure the temperature of 2D surfaces without contact using an ultrafast single-shot camera could lead to improved photothermal therapy and disease diagnosis.

Developed by INRS, the research center based at the University of Quebec, and published in Nature Communications, the technique is based upon the luminescence of nanoparticles doped with rare earth ions.

"These nanoparticles are considered as nanothermometers because their luminescent properties change with the temperature of the environment," commented Fiorenzo Vetrone of INRS. "They are also biocompatible."

Christened single-shot photoluminescence lifetime imaging thermometry (SPLIT), the technique has been developed from the principles of compressed ultrahigh-speed imaging of small areas, and essentially relies on measuring how fast emitted light fades out.

Photoluminescence lifetime imaging using emitters which, once excited, demonstrate temperature-dependent emission is a promising approach to temperature measurement, according to the project's published paper, not least because it is less susceptible to stray light or photobleaching than intensity-based methods.

However, existing luminescence techniques have to date not been able to meet the challenge of 2D temperature sensing of moving samples with a micrometer-level spatial resolution.

The new method tackles the problem by combining dual-view optical streak imaging of lanthanide-doped upconverting nanoparticles, whose luminescence acts as an indication of temperature by absorbing pairs of near-infrared photons and emitting a higher-energy photon. The temperature can then be sensed by checking how fast the emitted light fades out, and applying the signal processing approach termed compressed sensing to the data.

"SPLIT compressively records the photoluminescence emission over a 2D field-of-view in two views," said the project in its published paper. "The dual-view algorithm reconstructs spatially resolved intensity decay traces, from which a photoluminescence lifetime distribution and the corresponding temperature map are extracted."

SPLIT can follow a thermal phenomenon in real-time, and should enable a nanoparticle's luminescence lifetime to be followed even in a moving sample.

"Compared to existing thermometry techniques, SPLIT is faster and has higher resolution," commented INRS's Jinyang Liang. "This allows a more accurate temperature sensing with both an advanced and economical solution."

One application for the technique could be biomedical, exploiting the way that the rapid metabolism of cancer cells leads to a higher temperature than that of normal tissue. At present, the capacity to detect melanomas and micro-melanomas is limited, according to the project, with existing diagnostic approaches restricted by their invasiveness, resolution and accuracy, ultimately leading to a large number of unnecessary biopsies.

"SPLIT marks an important step in the technical development, noted Liang. "With high resolution, the technology could be used to precisely locate the cancerous mole."

In addition SPLIT might be used following the detection of melanomas to monitor the light dose during certain types of phototherapy treatment, in which the tissues are exposed to near-infrared light.

"We want to eradicate the cancer, but not the surrounding tissue," commented Vetrone. "If the is temperature is too high, then the treatment could be decreased or stopped for a while. And if it's too low, we can increase the light to get the right dose."