...as Fraunhofer ISE reports significant (19 per cent) growth of solar contribution to Germany's electricity production in 2022. 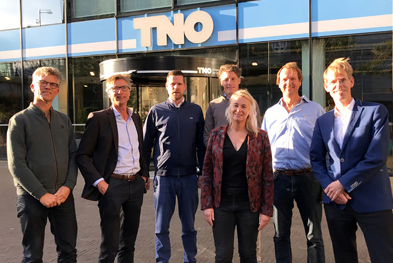 The Netherlands’ Offshore Solar Platform was officially launched on 1 January, 2023. For now, the platform comprises a core group of Dutch companies, whose ambition is to develop and roll-out a new generation of offshore solar power farms, in partnership with Dutch research center TNO.

The platform currently characterizes itself as “a discussion partner for the Netherlands Government, Tennet, and other sectors and stakeholders active in the North Sea”.

Chairman of POS Wiep Folkerts, of TNO, commented, “As members of POS, we would like to cooperate on innovation, for example when it comes to ecological aspects and integration with offshore wind and hydrogen production.”

The industry partners emphasized the importance of good industry cooperation with the government, stating at the start of January. “A good legal framework and good regulations regarding integration into the energy system could accelerate the development of offshore solar for the Netherlands,” Folkerts said. “3 GWp by 2030 is then easily achievable. In addition, offshore solar offers wonderful export opportunities for Dutch technology.”

The TNO statement added, “If we want to generate green energy on a large scale, we’ll have to be smart in using the scarce space available in the Netherlands. Within 10 years, TNO will make it possible to use any surface to generate sustainable energy, with due regard for the landscape and the natural world.

“With our partners, we’re developing innovations such as floating solar farms and power-generating buildings and infrastructure. In this way, we’re contributing to the world of tomorrow.” 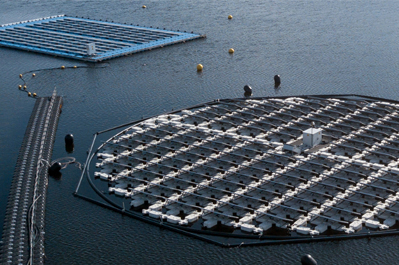 Floating solar is expected to make a significant contribution to the energy transition, added the TNO statement. “In 2050, 200 gigawatt peak (GWp) of solar power is expected to be generated in the Netherlands, 25 GWp of which will be on inland waters and 45 at sea.”

However TNO is candid about the current position on the likely lifespan and performance of offshore-based solar systems, adding, “Knowledge is lacking, for example, on the effect of wind and waves on solar panels. That's why we are doing plenty of research.”

A consortium under TNO’s leadership has started a research project on floating solar energy systems. Partners include petrochemical company SABIC, Norwegian energy company Equinor, and the Netherlands municipality of Westvoorne. TNO adds, “Three promising system designs have been installed and we are monitoring them for a year.”

This research is expected to contribute to the further development of floating solar energy, including in locations with high waves, high winds, and brackish water. The research is taking place at the Fieldlab Green Economy Westvoorne in the Oostvoornse Meer near the Maasvlakte, The Netherlands.

... and Fraunhofer ISE reports on electricity generation in Germany in 2022

Germany’s Fraunhofer Institute for Solar Energy Systems (ISE) has presented its annual evaluation of electricity generation in the country during 2022. The year was characterized by extreme prices and strong growth in renewable energies. Electricity trade with neighbouring countries also picked up.

German photovoltaic systems generated about 58 TWh in 2022, of which about 53 TWh were fed into the public grid and 5 TWh were self-consumed. The addition of 6.1 gigawatts of photovoltaic power plants increased the installed capacity to about 66 gigawatts (as of November). This was the highest photovoltaic addition since 2013.

For wind onshore, 2022 was an average year; wind offshore was rather below average. Wind on- and offshore together produced about 123 TWh, down from 112 TWh in 2021. Wind generated the most electricity, followed by lignite, solar, hard coal, natural gas, biomass, nuclear, and hydro.

Hydropower generation of 16 TWh was significantly lower than 2021 (19 TWh) due to the hot and dry summer. Biomass, at 42.2 TWh, was slightly above the previous year's figure.

There was little change in installed capacity. In total, renewable energy sources produced about 244 TWh in 2022, about 7.4 percent more than in the previous year (227 TWh). Their share of net public power generation increased to 49.6 percent (up from 45.6 percent in 2021), and their share of load was 50.3 percent.