“Until now, limitations on materials have prevented such commercialization,” says Ganvix boss. 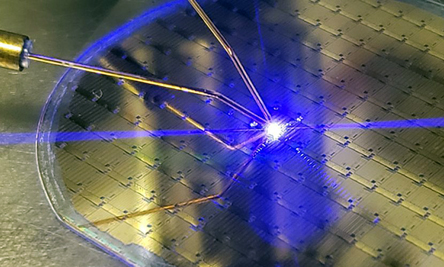 GaN VCSEL devices have been long sought after but have not reached commercial maturity due to material growth and processing challenges, say the partners.

The target markets for the collaboration include consumer electronics, industrial, medical and life sciences, communications, and metaverse applications such as AR. Near-term applications include VCSEL-based light engines for laser scanning displays, lasers, and laser arrays for free space and polymer fiber-based communications.

Two critical components to form a VCSEL laser, the distributed Bragg mirrors and active quantum well region, are more challenging to fabricate in GaN than for GaAs-based VCSELS, which have seen significant commercial success operating in IR wavelengths.

In this collaboration, Ganvix will leverage its proprietary VCSEL architecture based on nanoporous technology to facilitate the fabrication of DBRs. Ganvix has demonstrated this technology in GaN VCSEL devices operating at the blue wavelengths and has completed the design and demonstrated the DBRs for green wavelengths.

BluGlass is to bring its expertise in remote plasma chemical vapor deposition and green active QW design to grow the green QW and laser active region. The combined technology will be commercialized by Ganvix, completing a line of VCSEL products across blue to green wavelengths.

John Fijol, CEO of Ganvix, commented, “This is a significant collaboration, which allows us to demonstrate VCSELS operating in the green region of the spectrum.

“We see many applications for these devices, but until now, limitations on materials have prevented commercialization. The combination of our nanoporous materials, which we demonstrated earlier this year for blue VCSELS, and BluGlass’ RPCVD-grown GaN provide a path to finally bring green GaN VCSEL to market.”

Jim Haden, BluGlass’s President, said, “BluGlass’s RPCVD technology provides an ideal solution to increase performance and brightness for green-wavelength lasers. We are excited to be working with Ganvix to bring these two cutting-edge technologies together and pioneer next-generation applications.”