Modules developed by Australian firm Silex Systems will now be shipped to the US for a pilot demonstration. 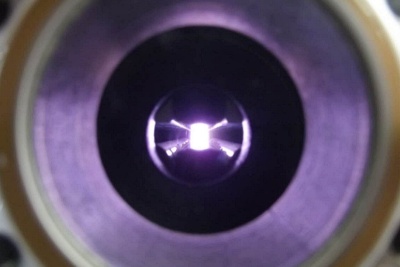 Commercial operation of a laser system to enrich uranium for use in nuclear reactors could start by 2027.

That’s according to the latest announcement from Silex Systems, the Australian company that is developing the system for potential deployment in the US.

Last week Silex said that it had passed a key milestone in the system’s development, after completing an eight-month test program of the first module of full-scale laser technology that would be needed by its exclusive licensee, US-based Global Laser Enrichment (GLE).

'Pivotal milestone'
Silex CEO Michael Goldsworthy commented: “This is a pivotal milestone for the Silex uranium enrichment technology [that] demonstrates the ability of our laser systems to operate reliably at commercial scale for extended periods.”

The company points out that the performance validation process included an independent review of the laser system conducted on-site at its Lucas Heights facility, just outside Sydney, by a specialist US engineering contractor.

GLE's CEO Stephen Long said: "We are pleased with the performance and capability of the laser system achieved by Silex and look forward to receiving the first module into our Test Loop, where it will be integrated with GLE technology to demonstrate separation performance at scale.

"We applaud the efforts of Silex’s talented laser engineering team to design, develop, and deliver this unique, cutting-edge laser technology as GLE strives to commercialize laser-based uranium enrichment in the US and expand domestic nuclear fuel supply.”

Silex and GLE are hoping to begin commercial operation of that system by 2030 - although the two firms say that they are currently looking at ways to accelerate that date to 2027, depending on market demand.

Russian uranium
Those discussions were likely sparked by Russia’s invasion of Ukraine, which has raised a huge question mark over the future supply of enriched uranium for nuclear reactors.

In its recent annual report, Silex stated: “Russia’s invasion of Ukraine turned FY2022 into a year of very extraordinary circumstances, with energy markets being thrown into chaos as trade sanctions were progressively imposed on many Russian exports.

“Today, the global nuclear fuel industry remains vulnerable to the threat of lasting sanctions and this has precipitated the most significant shake up of the nuclear fuel markets in decades.

“It became clearly evident that the global nuclear industry had become very reliant on Russian-sourced nuclear fuel and nuclear technology.

“The US nuclear industry currently imports around 20 per cent of its enriched uranium fuel requirements from Russia, with similar levels of reliance in other parts of the Western nuclear industry - broadly defined as the nuclear industry not including Russia, China and their allies.”

At the same time, Russia’s control of gas supplies to Europe and the huge increase in the price of gas means that there is renewed interest in nuclear energy across the continent.

That represents a major change in sentiment since the aftermath of the Fukushima disaster in 2011 saw both Japan and Germany turn away from nuclear energy, depressing the price of uranium in the process.

Higher uranium prices in the wake of Russia’s recent actions means that the commercial potential for laser enrichment of the radioactive 235U isotope is more attractive - particularly as the approach is expected to be more efficient than the conventional centrifuge separation process used currently.

Recent geopolitical developments are also behind US Congress passing the Inflation Reduction Act in August 2022, which Silex says includes $700 million in funding support for uranium enrichment efforts at the Department of Energy.

Laser isotope separation
Co-invented by Goldsworthy, the laser separation technique works on the principle that output wavelengths can be tuned precisely to the different absorption lines of uranium compounds featuring different isotopes of the radioactive element.

Some of those absorption lines are close to the output wavelengths of carbon dioxide lasers, which can be adapted to resonate with one isotope or another and so initiate the separation process.

There are various ways in which the laser approach could be applied. The likely first application would be to “re-enrich” depleted uranium “tails” of the material from US stockpiles that have built up over several decades. These stockpiles are thought to contain 0.2-0.5 per cent 235U.

That recycled uranium could then be sold back into the market, before undergoing further re-enrichment to reach the much higher 235U concentrations needed by nuclear reactors (around 5 per cent 235U).

Although the laser separation idea is decades old, it has never been commercialized - partly due to fears that the enrichment technology could get into the hands of hostile regimes.

Because laser enrichment facilities could be built in much smaller facilities than conventional centrifuge plants, any proliferation of the technique would be more difficult to police.