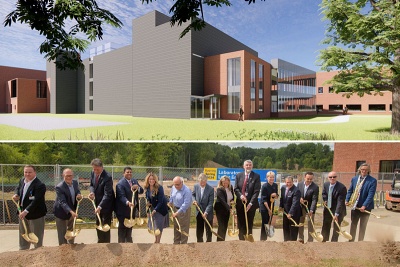 Builders working at the University of Rochester’s Laboratory for Laser Energetics (LLE) have broken ground on a new $42 million, 66,000-square-foot office and laboratory building - the facility's first major expansion since 2003.

The new building, funded by the university thanks to $83 million received by LLE via the latest federal Omnibus Appropriations bill, will connect directly to LLE’s existing site on East River Road in Brighton, New York.

Targeted for completion in 2024, it will house laboratory and office space for approximately 110 scientists and LLE personnel, as well as a major new laser beamline.

AMICA laser
The largest laboratory space within the building has been earmarked to house the active multi-pass imaging cavity amplifier (AMICA) laser system, a high-energy, long-pulse laser that LLE scientists are assembling for Stanford University’s “Matter at Extreme Condition” upgrade to the SLAC National Accelerator Laboratory.

According to an LLE presentation from December 2020 AMICA will integrate a complete beamline into a flexible configuration to serve multiple purposes. Using an actively cooled disk amplifier will enable increased pulse repetition rates, while a cavity extension will allow pulse lengths of around 150 ns.

Other elements of the new building include a class 1000 target fabrication and thin-film coating lab, a laser computing facility, and several other wet lab and general lab spaces.

The construction phase of the project, which LLE says began last month, represents the first expansion of LLE since the Omega laser project two decades ago.

In 2018 the laboratory’s future appeared to be in jeopardy, after cuts to funding and a ramp-down of operations were threatened as part of the 2019 presidential budget request.

However, bipartisan support for LLE was subsequently found in the Omnibus Appropriations bill, with LLE receiving $82 million in the fiscal year 2021 budget, and $83 million in the latest allocation. The federal funding comes via the National Nuclear Security Administration (NNSA).

Senator support
University of Rochester president Sarah Mangelsdorf said at a groundbreaking ceremony: “The addition of these state-of-the-art facilities helps strengthen the LLE’s designation as one of the leading laser laboratories in the world and will provide space to support its expanding research agenda.

“It’s gratifying to see our community rally around the important scientific work that is being done here. I especially want to thank our elected officials for their leadership and advocacy on behalf of the LLE and the tremendous support we continue to receive due to their efforts.”

Those officials include US Senators Charles Schumer and Kirsten Gillibrand, who were keen to stress the critical role played by the facility both locally and at a national level.

“The work done at University of Rochester’s LLE is essential for our national security and energy research and is vital to our regional economy, employing hundreds of scientists and bringing millions of dollars of investment into the Rochester area every year,” said Schumer.

“Now with this expansion, the University of Rochester is prioritizing the needs of the employees and students of LLE, and I applaud their efforts to ensure they can continue to focus on their groundbreaking research for years to come.”

Gillibrand added: “LLE’s Omega Laser Facility houses two of the largest and most capable lasers at any academic institution in the world and supports scientific missions vital to our national and economic security.

“I’m proud to have delivered millions in federal funding to support groundbreaking research at LLE. I will keep fighting to ensure that New York’s top-notch research institutions have the resources they need to remain global leaders in scientific innovation.”

Users’ Facility
LLE director Christopher Deeney praised the long-standing NNSA cooperation, noting that it had produced hundreds of trained PhD students and thousands of scientific papers over the years.

Established back in 1970, LLE is said by Rochester to represent the largest university-based US Department of Energy (DOE) supported research center in the country.

Among its key activities are implosion experiments, in support of a DOE program to explore inertial confinement fusion as a future source of energy, and to develop new laser and materials technologies.

The facility also provides graduate and undergraduate educational programs to students at Rochester and other universities across the US, and operates the National Laser Users’ Facility.