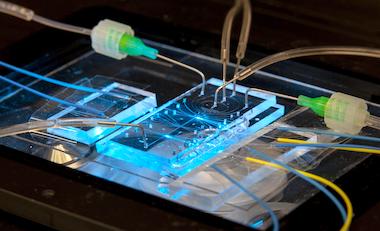 A project at the National Institute of Standards and Technology (NIST) has designed a flow cytometry device intended to help control some of the data variations inherent in the technique.

In a flow cytometry operation, cells tagged with fluorescent markers are illuminated while passing along a channel narrow enough to force the cells into roughly single file, and analysis of the light emitted reveals information about individual cell size, DNA content and other parameters.

One issue with the technique, however, has been the lack of ways to quantify variations in those readings, or to understand the range of values that a given instrument might return for repeated measurements of the same cells.

"Flow cytometry is an invaluable technology, but confidence in single-cell measurements remains limited due to a lack of appropriate techniques for uncertainty quantification," commented the project in its Lab on a Chip paper. "It is particularly challenging to evaluate the potential for different instrumentation designs or operating parameters to influence the measurement physics in ways that change measurement repeatability."

The NIST project designed a cytometry platform that makes four measurements of each particle, two readings at each of two different points separated by 16 millimeters in the channel with flow rates as high as 100 or more particles per second. This is said to allow the observation of measurement-dependent variations as low as 1 percent.

Alongside control of fluid dynamics so that a particle's time of transit from one node to the other was precisely known, this architecture also required a redesign of the optical aspects.

"One challenge was to fabricate a channel about 40 by 80 microns incorporating two identical zones at which laser light was applied to the passing particle, and to ensure that the greatest amount of emitted fluorescent light was captured by a pair of detectors that measured in both upstream and downstream directions," commented NIST.

The project developed advanced waveguides that minimized loss and kept the emission light from spreading out, and also investigated the use of different laser wavelengths to reveal different properties of the sample.

"We have modified the waveguides extensively to increase the sensitivity by incorporating microlenses and other improvements," said NIST's Matthew DiSalvo. "We think we can soon provide uncertainty measurements while also matching the sensitivity of commercial single-measurement systems that cost hundreds of thousands of dollars."

Off the wall: imaging around corners

In separate research, NIST has made another incremental step in the perennial optics challenge of imaging objects concealed around corners, this time using sub-millimeter radiation.

Existing research in this particular sector of non-line-of-sight imaging has included using deep neural networks to interpret the speckle patterns returned by occluded objects, and analyzing spectral correlations in scattered light to recover a high-resolution holographic representation of an obscured scene.

The new NIST approach relies on detecting signals of longer sub-millimeter wavelength, from 300 micrometers up to 1 millimeter. A variety of wall materials can act as partial mirrors for these wavelengths, reflecting rather than diffusely scattering radiation from a concealed object, according to the project.

Proof-of-concept trials showed that this principle could image a concealed scene in 20 minutes, but a larger array of detectors and signal-amplifying indium phosphide transistors could allow real-time operation.

"What's cool about this method is its simplicity,” said NIST's Erich Grossman. "There's no quantum mechanics, no relativity, there's nothing cryogenic or anything fancy. Just transistors and a basic computer and mirrors."