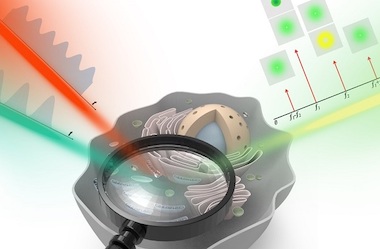 Stimulated emission depletion (STED) microscopy is one of the family of super-resolution techniques developed to allow imaging beyond the normal diffraction limit of optical microscopy.

The principle underlying STED, for which Stefan Hell shared the 2014 Nobel prize for chemistry, involves adding a second laser pulse to a fluorescence microscopy architecture.

Delivered in a ring-shaped profile, the second depletion pulse quenches fluorescence away from its central hole, and the imaging signal from the unquenched area can be narrowed down to an area smaller than conventional techniques can optically isolate.

Various optimizations to the basic STED procedure have been developed, including a project at Georgia Tech employing a bespoke mirror arrangement to improve both lateral and axial resolution. Yale University used a combination of specific red-emitting dyes, adaptive optics and a water-immersion objective lens while applying STED to the imaging of sub-cellular details in living mice.

Despite the growing use of STED in bioimaging and research, however, the level of background noise inherent in the technique has remained a potential problem, interfering with spatial resolution and image quality. Techniques to tackle the issue based on time-domain, space-domain, and phasor-domain principles have been tried, but none have proven to be perfect.

A project at China's Zhejiang University has now developed a STED approach intended to reduce this unwanted background signal, potentially enhancing the versatility of the STED technique for future applications.

As described in Advanced Photonics, the project identified two major causes of the background signal: fluorescence generated by the ring-shaped depletion beam re-exciting fluorophores due to its ultrahigh light dose; and residual fluorescence from sources not quenched as intended at the periphery of the depleted area.

The team's solution has been named dual-modulation difference STED microscopy (dmdSTED), and involves applying time-domain modulations to both of the two continuous-wave lasers involved in the technique. Doing so means that "the signals are distributed discretely in the frequency spectrum and thus are obtained through lock-in demodulation of the corresponding frequencies," noted the project in its paper. The background signals can be then be selectively eliminated from the effective signal without loss of temporal resolution.

"The conspicuous novelty of STED is to discriminate molecules via fluorescent on- and off-switching in the energy level regime, circumventing the spatial diffraction limit," said the team."Our dmdSTED discriminates detected signals in the frequency spectrum, which are difficult to tell apart in the space- or time-domain."

To test this principle, the project applied dmdSTED first to the imaging of 40 nanometer fluorescent particles. Comparing the results with a conventional STED image showed that although "the resolutions of STED and dmdSTED are basically the same, for dmdSTED the halo around the particles caused by the background signal at the periphery is relatively weakened," noted the team.

Tests on HeLa cells also showed that imaging contrast and resolution were enhanced by the dmdSTED approach, with spatial resolution increased by 22.9 percent compared to normal STED.

The new technique may enhance the applicability of STED beyond its current uses, according to the project, as dmdSTED can accept more types of samples with different spectral characteristics than the fluorescent dyes now usually used. The project mentioned quantum dots with wider excitation spectra as being one possible new target.