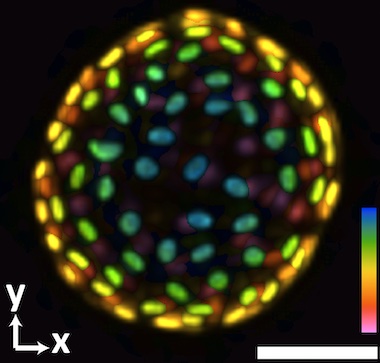 Seeing exactly what happens during these interactions can be a challenge, however. Conventional fluorescence microscopy methods can be time consuming and may not capture the dynamic, sometimes unpredictable, cellular processes in these model systems.

A team at Georgia Tech has now developed a new system for imaging organoids, able to reconstruct a high-resolution 3D representation in real time with a single camera image.

The work, published in Biosensors and Bioelectronics, aimed to combat the way that underlying scanning mechanisms of conventional imaging methods inevitably compromise the time resolution of volumetric acquisition.

"Getting detailed 3D images of these miniature models of organs, and getting a good look at how they change under different conditions or stimulation, can tell us a lot about how the body works," said Shuichi Takayama from Georgia Tech and Emory University. "It can tell us how diseases progress, or how mechanical forces and certain drugs may change or affect cellular behavior."

"This latest system is novel because it is entirely custom-built for imaging at the tissue and animal scale," commented Jia. "We built everything from scratch on an optical table."

From organoids to animal models

The Georgia Tech project validated its device by imaging human induced pluripotent stem cells-derived colon organoids (hCOs) as they were subjected to extracellular physical cues such as osmotic and mechanical stresses.

According to the team's published paper, the hPSF-FLFM platform proved capable of offering cellular resolution of 2 to 3 microns in x-y and 5 to 6 microns in z directions, along with millisecond-scale spatiotemporal characterization of whole-organoid dynamic changes. Large imaging volumes of around 900 x 900 x 200 microns were achieved.

The hPSF-FLFM approach "enables exploration of less accessible spatiotemporally-challenging regimes for organoid research," said the project, while Shu Jia commented that the new platform, alongside other novel imaging approaches being developed at Georgia Tech, could potentially transform conventional 3D microscopy beyond the study of organoids.

"We can look, cell by cell, throughout the entire organoid, in high spatial and time resolution, and see from multiple angles what happens as a result of an external perturbation, or a response to a specific drug, or any change in the overall environment," Jia said. "Because this is a custom-built system, it’s very flexible and adaptive. It works with organoids, but similarly, it can work with animal models. I think we can extend this method to different areas of research, and there are a number of potential collaborations we are exploring."