Platform combining microscopy and laser detachment of cells is among new tools for researchers. 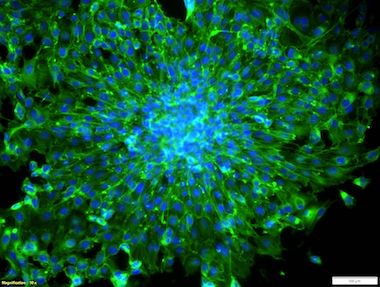 Lift off: moving cells into position

New approaches to the preparation and analysis of single cells and cell assemblies are key elements in bioanalysis techniques, with optical technologies playing a central role.

Fraunhofer Institute for Laser Technology (ILT) is developing a number of relevant instrumental platforms, and will present the latest results of its ongoing research at Munich's analytica laboratory technology conference in June.

One instrument is Liftoscope, a system for cell sorting before subsequent cultivation designed to analyze and transfer biomaterials precisely in a way that is gentle on the cells themselves. It is being developed jointly by Fraunhofer ILT and Fraunhofer Institute for Production Technology (IPT) in a two-year project running until the end of 2022.

According to Fraunhofer data, the Liftoscope platform uses a high-speed microscope to scan a cell culture plate, a bespoke algorithm to analyze the resulting image data and determine cell morphology, and a laser-based principle to physically move the cells.

This approach is built around laser-induced forward transfer, or Lift, a method of moving cells into desired locations developed to be suitable not just for groups of multiple cells but for individual cells as well.

As described in Fraunhofer literature, Lift involves an irradiation process without any additional absorbing layer, such as thin metal layers, to create a droplet laden with cells or proteins. A pulse from a 3 µm-laser source applied to the hydrogel layer creates a vapor bubble, with the expansion and collapse of the bubble propelling the transfer layer forward and moving an embedded cell onto a receiver slide within a well-defined volume.

"The cell cultures are located on the cell culture plate in a special hydrogel," commented Fraunhofer ILT. "A laser is focused into the gel very locally under the selected cells and generates a precisely tuned amount of thermal energy. The short pulse causes the gel to expand and transfer the cells to a cell culture support above, on which they are then further cultured."

One remaining challenge in a Lift approach is the transfer of cells adherently growing on a surface before transfer, using an appropriate hydrogel to improve the cell survival rate. Fraunhofer IPT and ILT are also working on a faster and more sophisticated algorithm, that can classify and select cells based on various characteristics.

Additive manufacturing is another topic of Fraunhofer research, with 3D printing potentially offering routes to construction of artificial tissues and improved therapy diagnostics. Organ-on-a-chip devices created in this way can potentially simulate the physiological responses of complex biological systems, if the cell structures are created with sufficient positional accuracy.

In combination with a microfluidic chip design, an organ-on-a-chip can be constructed from multiple cell types, each of which can be easily analyzed. The tests can be precisely targeted, and are expected to offer better and more accurate results when the effects of bacteria, viruses and drugs on tissues are studied.

"The aim of 3D bioprinting is to arrange cells in precisely defined and reproducible spatial configurations to form artificial tissues," noted the Fraunhofer team. "Cell-laden hydrogels, so-called bioinks, are printed in an extrusion-based process. In such cultures, the cells develop approximately as they do in the body. At the same time, researchers can more easily intervene and observe the process."