New source creates different images depending on light and environment

Metasurface-based technology developed at St. Andrews could be used to optically encrypt information. 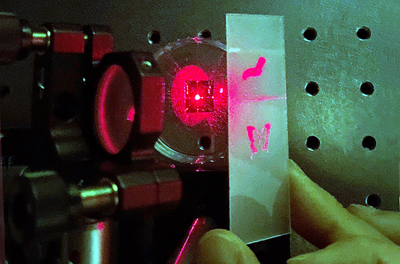 Holographic images depend on surrounding medium and wavelength used.

A new metasurface-based device can produce multiple distinct holographic images depending on the surrounding medium and the wavelength of light used. Its ability to store information that is only retrievable with the right set of keys — such as a certain light wavelength combined with wet conditions — could be further developed to design simple yet effective encryption devices.

“Our new metasurfaces give an immediate and simple readout of the environment surrounding the surface of the device,” said research team leader Andrea Di Falco from the University of St. Andrews in the U.K. “In addition to encryption applications, this could be used as a humidity sensor or as part of more complex light-based biomedical systems.”

The researchers have demonstrated a device that reveals a holographic butterfly with 705nm light in dry conditions and a caterpillar when 750-nm light is combined with wet conditions. When 660nm light is used in dry conditions, both images are visible. The selective response of the metasurfaces can be tailored to work with various pre-programmed conditions.

“Our holographic devices contribute to the worldwide effort to develop the physics and applications of photonic metasurfaces, which are one of the most versatile photonic tools available to researchers to encode and manipulate information using light,” said Di Falco.

The new work is part of the Di Falco team’s ongoing effort to develop photonic metasurfaces that operate in the visible range and can be used for biomedical applications, which often involve wet environments.

“Holographic metasurfaces are particularly interesting because they can be used to deliver complex information by producing images that can be immediately interpreted, without the need for additional layers,” said Di Falco. “We are specifically interested in integrating different photonic functionalities into one device.”

Holographic metasurfaces can create detailed images that depend on the properties of the light they reflect or transmit. To create holographic metasurfaces that encode more than one image, the researchers used two types of meta-atoms, which act like pixels. One type of meta-atom only reflects light of a specific wavelength in dry conditions, while the other has high reflectivity only when a different wavelength is used in wet conditions.

“We designed a relatively simple resonant meta-atom geometry that enhances the response of the holographic metasurface to the environmental conditions,” said Di Falco. “This is an effective way to use the refractive index of the surrounding medium as an additional degree of freedom that enables multiplexing of information encoded in the metasurface.”

The researchers assessed the response of the holographic metasurfaces by quantitatively measuring their efficiency for different wavelengths in air and in water. The metasurfaces produced good contrast between the images, with little crosstalk. In other words, only one image was visible for each set of parameters, which demonstrated two-tier information encoding.

Next, the researchers plan to increase the selectivity of the meta-atoms to create metasurfaces that distinguish between different media that have very similar optical properties. This could be used to create holographic sensors that produce different images when exposed to different concentrations of a particular substance.