IPG slips back despite record sales in 2021 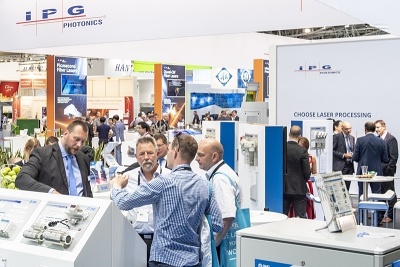 IPG Photonics saw its stock drop in value by nearly 10 per cent after the fiber laser firm posted its latest financial results, despite announcing record annual sales for 2021.

At $1.46 billion, the yearly total was up 22 per cent on the Covid-impacted figure for 2020, and slightly above the previous record, set in 2018. But news that 2022 would prove to be a “year of transition” away from the Chinese cutting market appeared to worry investors.

While annual pre-tax income of $366 million for full-year 2021 was strongly up on the 2020 figure, it was well below the $534 million registered in 2018 - indicating the degree to which the Chinese cutting sector has become more competitive since then.

IPG's executive team also said that it was monitoring the ongoing tensions between Russia and Ukraine, and developing contingency plans in case any economic sanctions imposed on Russia proved disruptive to the business.

Transitional year
For the closing quarter of 2021, sales of $364.5 million were up 8 per cent year-on-year, with pre-tax income for the period rising nearly 30 per cent, to $84.5 million.

Those increases came as IPG’s revenues became less reliant on business in China, with the country accounting for less than one-third of quarterly sales - the lowest proportion in several years.

IPG’s CEO Eugene Scherbakov said in response to the results: “Growth in Europe, North America, and Japan, as well as higher sales in emerging growth products, drove results in the fourth quarter, allowing us to exceed our revenue guidance and grow year-over-year despite weakness in China.”

Scherbakov added that the figures showed the company is now achieving a better balance in its business, and that IPG would pursue more profitable sales in electric vehicle, renewable energy, handheld welding, medical, and ultrafast laser applications - increasingly diversifying away from the highly competitive high-power laser cutting market in China.

“As a result, this will be a transition year for IPG with expected strength in emerging growth products, welding and cutting in Europe, North America and Japan, offset by lower sales in high-power cutting in China,” added the CEO.

“Demand in the high-power cutting market in China is expected to stabilize at a lower level.”

Green laser sales up sharply
Because sales of cutting lasers to China were very strong in the first half of 2021, it means sales growth this year will be muted. Scherbakov indicated that total revenue growth in 2022 will end up somewhere between 3 per cent and 6 per cent - although long-term growth is expected to be significantly higher than that.

Speaking during an investor conference call, the CEO said that demand for IPG’s green lasers rose by 50 per cent in 2021, alongside strong traction in welding applications for electric vehicle batteries and also for IPG’s handheld welding laser, called “LightWeld”.

“Our AMB [adjustable mode beam] lasers provide a broad range of beam tunability that enables superior speed, better weld quality, ability to weld disparate materials and spatterless welding, which is extremely important in the electric vehicle battery manufacturing process,” added Scherbakov, suggesting that as well as being faster and more precise than traditional TIG and MIG approaches, LightWeld was also much easier to use.

He also pointed to record sales for medical applications in the latest quarter, driven by urology procedures where the firm’s thulium lasers are used in prostate and kidney stone removal, as further evidence of diversification.

In addition, Scherbakov predicted significant traction in the use of lasers for production of more efficient solar cells, although that particular market remains in something of a cyclical downturn right now.

Russia-Ukraine contingencies
IPG’s executives have also been taking contingency actions in response to the geopolitical tensions on the border between Russia and Ukraine, and the potential for disruptions to IPG’s business from any sanctions that may be imposed on Russia.

IPG makes a large number of optical components at its production sites in Russia, which are then shipped to the US and Germany for integration in lasers.

CFO Tim Mammen said: “At this time, it is unclear if sanctions would be put in place and, should they be, if they would cover components bought from or sold to our Russian subsidiary.

“Sanctions could also target Russian banks and the banking system. In response to this uncertainty, we are developing contingency plans to mitigate possible disruptions, including increasing local inventory levels of key imported components, and increasing production at other locations.”

• Shortly following the latest update, IPG’s stock price dropped in value by approximately 10 per cent. Trading at around $135 on the Nasdaq early on February 15, that price reflected a market capitalization of just under $7 billion.