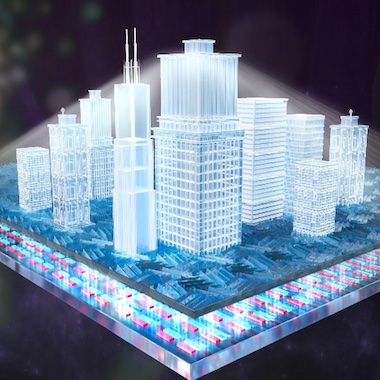 Light field displays, in which careful manipulation of light rays by suitable optical elements produces a 3D image in space without the need for a viewer to wear any special glasses, are expected to be a major focus of the display industry once the technical kinks are ironed out.

Those hurdles currently include data handling issues and a number of optical factors, the short viewing distances for objects displayed being a significant issue.

A project at China's Soochow University has made what could be a step towards solving that problem, by designing a nanostructured flat lens with an improved depth of focus. The findings were published in Optica.

"Most light field 3D displays have a limited viewing range, which causes the 3D virtual image to degrade as the observer moves farther away from the device," said team leader Wen Qiao from Soochow University.

"The nanostructured flat lens we designed is just 100 microns thick and has a very large depth of focus, which enables a high-quality virtual 3D scene to be seen from farther away."

The breakthrough exploits the ability of nanostructured lenses to influence the diffractive behavior of light, and the potential for flat lenses to minimise the optical aberrations that curved or spherical lenses can be prone to.

Recent examples of these characteristics being put to use have included the design of a thin flat lens with tunable features for holography, and a lens capable of focusing different wavelengths and polarizations of light to the same focal point.

According to the project's Optica paper, the design of the lens optimized the sawtooth relief profile of a GDL's surface in order to both improve the viewing distance of objects formed by the lens and control the spectral response for color fidelity across red, green and blue light. Intertwining different patterned nanostructures for different views allowed the creation of a pixelated view modulator, the optical component that creates the various perspectives for a scene in a light field display.

"A 3D display that creates four views, for example, would use four of these lenses, each of which converges the light into a unique view," commented the project.

The team incorporated its lenses into a 4-inch prototype 3D light field display with viewing distances between 24 and 90 centimeters. The viewing angle in the prototype is currently only 9 degrees, but altering the design of the nanostructures should allow this to be greatly enlarged.

"We developed this new technology in hopes of creating displays that could allow people to feel as if they were actually together during a video conference," said Qiao. "With the continued development of nanotechnology, we envision that glasses-free 3D displays will become a normal part of everyday life and will change the way people interact with computers."