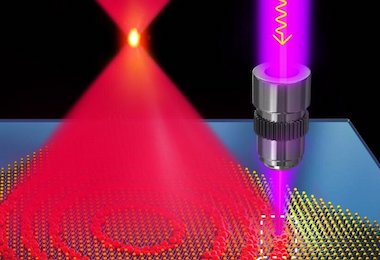 Flat lenses offer a way to minimize the optical aberrations and astigmatisms that conventional spherical lenses can be prone to, and can potentially open up new applications that traditional lens are unsuited for.

Metasurfaces and metamaterials are a key ingredient of these flat lens structures, although commercial viability of such items has so far been limited by the complex and expensive manufacturing processes involved.

A project led by researchers at Swinburne University of Technology has now developed a possible solution, and demonstrated how the action of a femtosecond laser on the surface of a metal can produce local surface structures that make the material act as a flat lens. The work was published in Light Science & Applications.

In particular the project showed that the process could be applied to a 2D metal monolayer to produce an ultrathin flat lens, a potentially straightforward route to achieving the phase and amplitude modulations needed for lens behavior in these thin metal layers.

"We have used the thinnest material in the world to fabricate a flat lens, and proved that the good performance of the ultrathin lens can lead to high resolution imaging," commented Han Lin of Swinburne University of Technology.

The project's raw materials were transition metal dichalcogenides (TMDCs), where transition metal species are paired with sulphur, selenium or tellurium. These are known to be promising candidates for next-generation nanometric optoelectronic devices due to their strong light-matter interactions, but using them in ultrathin forms has to date produced lenses of limited resolution.

The new manufacturing processes designed by the team focused a 800-nanometer 100-femtosecond laser onto single-crystal monolayers of TMDC compounds, with the first target being a WSe2 monolayer around 7 angstroms thick.

The interaction at the surface is unique, according to team, in that the ultrashort pulse only delivers energy to the electrons, not the metal ions. The photochemical effect breaks the W-Se bonds, leaving a "cold" tungsten ion free to react with oxygen and form nanoparticles of WOx on the surface.

"The process is significantly different from continuous-wave laser ablation, in which ablation is enabled by heating the entire lattice and no nanoparticles are generated," noted the team in its published paper.

A computer-controlled mobile stage allowed the laser to trace a pattern of concentric rings, and so create the same pattern of nanostructures on the metal. The height and lateral size of these nanostructures was 20 and 50-150 nanometers respectively.

Repeating the process on monolayers of molybdenum and platinum and then testing the optical properties showed that the resulting TMDC lenses were capable of sub-wavelength lateral resolution and a focusing efficiency of 31 percent.

"More importantly, with such a high focusing performance, we were able to demonstrate the diffraction-limited imaging capability of a lens based on a monolayer van der Waals material for the first time," noted the team.

Having proven the principle, the team believes that this approach could lead to a downscaling of optical devices through the use of 2D materials, along with potential applications as lenses in microscopes, telescopes and cameras.

"We can integrate the monolayer 2D material lens onto desired devices by simply attaching the material, then using a femtosecond laser to perform fabrication," commented project member Qiaoliang Bao. "The entire process is simple, and the method is flexible and low cost, so we see great application potential for the method."