Fabricated by established manufacturing processes, ring-shaped device is made of silicon nitride. 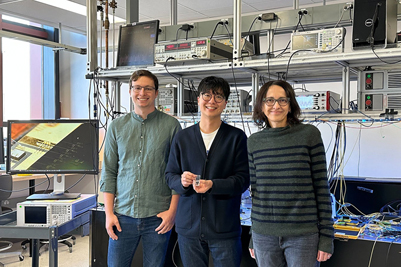 White, Ahn, and Vučković with the nanoscale isolator.

Lasers are transformational devices, but one technical challenge prevents them from being even more so. The light they emit can reflect back into the laser itself and destabilize or even disable it.

At real-world scales, this challenge is solved by bulky devices that use magnetism to block the harmful reflections. At chip scale, however, where engineers hope lasers will one day transform computer circuitry, effective isolators have proved elusive.

Against that backdrop, researchers at Stanford University say they have created a simple and effective chip-scale isolator that can be laid down in a layer of semiconductor-based material hundreds of times thinner than a sheet of paper.

“Chip-scale isolation is one of the great open challenges in photonics,” said Jelena Vučković, a professor of electrical engineering at Stanford and senior author of the study, published this month in Nature Photonics.

“Every laser needs an isolator to stop back reflections from coming into and destabilizing the laser,” commented Alexander White, a doctoral candidate in Vučković’s lab and co-first author of the paper, adding that the device has implications for everyday computing, but could also influence next-generation technologies, like quantum computing.

The nanoscale isolator is promising for several reasons. First, this isolator is “passive.” It requires no external inputs, complicated electronics, or magnetics – technical challenges that have stymied progress in chip-scale lasers to date.

These additional mechanisms lead to devices that are too bulky for integrated photonics applications and can cause electrical interference that compromises other components on the chips.

Another advantage is that the new isolator is also made from common and well-known semiconductor-based material and can be manufactured using existing semiconductor processing technologies, potentially easing its path to mass production. 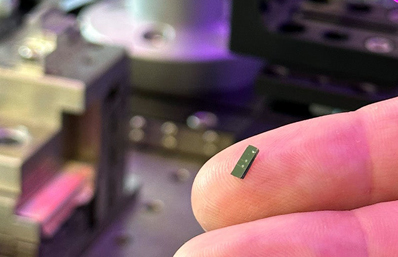 Close-up of the chip-scale isolator.

The new isolator is shaped like a ring. It is made of silicon nitride, a material based on the most commonly used semiconductor – silicon. The strong primary laser beam enters the ring and the photons begin to spin around the ring in a clockwise direction. At the same time, a back-reflected beam would be sent back into the ring in the opposite direction, spinning in a counterclockwise fashion.

“The laser power that we put in circulates many times and this allows us to build up inside the ring. This increasing power alters the weaker beam, while the stronger one continues unaffected,” said co-first author Geun Ho Ahn, a doctoral candidate in electrical engineering of the phenomenon that causes the weaker beam to stop resonating. “The reflected light, and only the reflected light, is effectively canceled.”

The primary laser then exits the ring and is “isolated” in the desired direction. Vučković and team have built a prototype as a proof of concept and were able to couple two ring isolators in a cascade to achieve better performance.

“Next steps include working on isolators for different frequencies of light,” said co-author Kasper Van Gasse, a post-doctoral scholar in Vučković’s lab. “As well as tighter integration of components at chip scale to explore other uses of the isolator and improve performance.”