Taiwanese technology incubator and US firm have demonstrated blue VCSELs and are now targeting green emitters, with metaverse applications in mind. 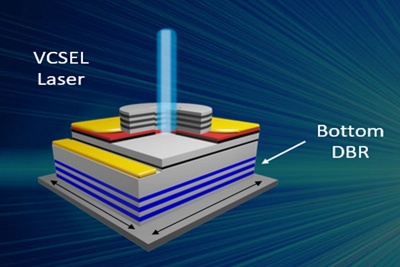 Based around porous gallium nitride (GaN) semiconductor materials, the approach has already resulted in blue emitters, with the partnership now looking to target green wavelengths and the production of VCSEL arrays.

It is hoped that the “phase II” effort will help deliver tiny arrays of red, green, and blue VCSELs suitable for mass production and deployment in emerging extended reality applications.

RGB VCSEL engines
“GaN VCSELs operating in the blue wavelength range have been demonstrated successfully based on the close collaboration between Ganvix’s design and ITRI manufacturability,” announced the two parties, adding that the next phase of development would include qualification testing and packaging of lasers and arrays, alongside the push for green wavelengths.

“The target markets include consumer electronics, industrial, medical and life sciences, communications and metaverse applications such as augmented reality (AR),” they added.

Similar to the Cambridge, UK, company Porotech, Ganvix is looking to exploit the behavior of porous GaN semiconductor material to deliver compact, lightweight VCSELs emitting between ultraviolet and green wavelengths.

The company cites superior wavelength control, a smaller spot size, and better array architectures as examples of the advantages offered by the approach.

ITRI, which has been instrumental in the development of LEDs and laser diodes for mass production in the past, is looking at how to accelerate Ganvix’s time to market.

“The resulting products will address the nascent opportunity for high-performance and low-cost GaN VCSELs in the billion-dollar global markets,” said the pair.

Nanocomposite Bragg reflectors
Although VCSELs based on gallium arsenide (GaAs) were developed more than two decades ago, and now represent one of the fastest-growing technologies in electro-optics, accessing shorter wavelengths has proved much more challenging.

“For these applications, GaN is required, but there has been no commercially viable solution to form the laser cavity mirrors required until now,” say the collaborators. “Ganvix has solved this problem using nano-porous technology to engineer the optical properties of GaN.”

“We are very happy to continue to deepen the cooperation with Ganvix and launch commercialized products, which can also drive Taiwan’s industries to enter the metaverse market.”

Ganvix CEO John Fijol added: “We are excited to announce the successful demonstration of blue VCSEL lasers using our proprietary nano porous GaN fabricated in collaboration with ITRI. This marks a critical achievement enabling commercialization of these new laser devices.”

According to the Delaware firm’s web site, the nanoporous technology enables fabrication of VCSELs entirely from epitaxially grown GaN without introducing any crystalline defects or lattice mismatch.

“The sub-wavelength nanopores result in a GaN/air nanocomposite, which has a tunable refractive index facilitating formation of high reflectivity (>99.9%) distributed Bragg reflectors (DBR) critical for VCSEL devices,” it explains.

Porotech, which raised $20 million in venture funding earlier this year and has agreed a deal with epiwafer foundry IQE, is also looking to exploit the properties of porous GaN, although so far it has targeted micro-LEDs rather than VCSELs.

Instead, the porous semiconductor structures are being engineered to emit at red, green, and blue wavelengths - meaning that each of the emitters needed for a near-eye display could be produced on a single semiconductor material platform.