Narrow pump sources at 1154 and 1064 nm can be doubled into yellow-green for retinal treatments. 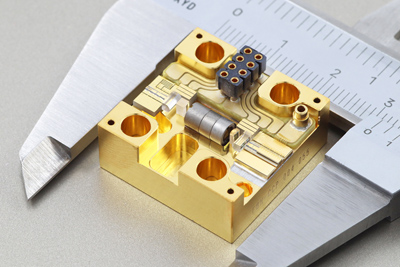 Detachment of the retina in the eye can lead to visual impairment and even blindness. Laser coagulation is a well-established method to treat holes or fissures in the retina using laser points. This technique is used to deal with diseases such as diabetic retinopathy and age-related macular degeneration. However, the systems currently utilized are rather expensive and limited to a few laser wavelengths.

This might be changed by semiconductor-based, particularly efficient and reliable laser sources from the Ferdinand-Braun-Institute (FBH), in Berlin, Germany. They can be flexibly adjusted to the optimal wavelength and realized cost-efficiently. Recently, FBH scientists have developed miniaturized and robust laser sources emitting in the near-infrared (NIR) wavelength range with high spectral radiance and a performance well suited for industrial applications.

The sources each consist of a pump laser whose light from the NIR spectral range can then be converted using a nonlinear crystal – this frequency doubling (second harmonic generation – SHG) halves the wavelength. As a result, the laser then emits in the visible spectral range. Current systems for laser coagulation use specifically the wavelengths 532 nm and 577 nm.

Therefore, FBH pump modules target these established wavelengths in the yellow-green spectral range. Lasers emitting at 577 nm are particularly interesting for ophthalmology since the oxygen-rich blood pigment, known as oxyhemoglobin, absorbs most strongly at this wavelength.

The combination of miniaturized light modules as pump sources followed by highly efficient SHG stages makes it possible to cover the entire spectrum from 400 nm to 600 nm. In contrast, the wavelengths of previous solid-state laser systems are limited to the 532 nm, 561 nm, 577 nm and 586 nm laser lines.

Moreover, the laser diodes and amplifiers can be manufactured in large quantities on wafers, thus reducing costs. For example, 400 of these active components fit on a 3in wafer with a diameter of 76 mm.

The spectrally-narrowband pump sources at 1154 nm and 1064 nm offer high optical output powers with an excellent beam quality. Subsequent frequency doubling into the yellow-green spectral range is thus simplified. This reduces cost and weight compared to the more complex laser sources used for laser coagulation to date. Portable, correspondingly flexible use of the systems in an outpatient environment would be possible as well.

A commercial miniaturized isolator was integrated between the two components to completely protect the laser (MO) from external feedback. This can be high (> 1%) in SHG crystals with waveguides and can significantly interfere with the MO.

Despite the small footprint of only 25 mm x 25 mm, the modules achieve optical output powers of more than 8 watts in continuous wave (CW) mode at 1064 nm as well as 1156 nm. At the same time, they achieve a very good beam quality of M2< 2 and a spectral linewidth of < 5 MHz. This performance can also be transferred to other wavelengths.