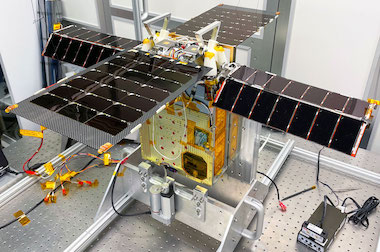 NASA's Jet Propulsion Laboratory (JPL) is preparing to search for ice in inaccesible corners of the lunar surface using an orbiting laser instrument.

Due for launch in Novenber 2022, the Lunar Flashlight (LF) instrument will be mounted on a "smallsat," a cubesat measuring 20 x 10 x 30 centimeters carried as a secondary payload on a SpaceX Falcon 9 rocket.

Since smallsats carry limited fuel supplies, LF will make its way to the Moon via a near-rectilinear halo orbit, in which the craft will initially be sent past its target and then slowly pulled back into lunar orbit by gravity, taking months to reach its final observation position.

The goal of LF is to determine the presence or absence of exposed water ice, revealing the composition, quantity, and form of water and other volatiles associated with permanently shadowed regions of the lunar surface.

"This launch will put the satellite on a trajectory that will take about three months to reach its science orbit," said John Baker, project manager at JPL. "Then Lunar Flashlight will try to find water ice on the surface of the Moon in places that nobody else has been able to look."

The four-channel laser projector onboard LF will illuminate permanently shadowed regions and measure surface reflectance at wavelengths where water ice absorbs; the greater the absorption, the more ice may be at the surface. It marks the first planetary mission to use an active multi-band reflectometer, according to JPL.

Water ice can be distinguished from dry regolith using spatial variations in albedo and reflectance ratios between absorption and continuum channels. Ice band depths will be mapped in order to distinguish the composition of the permanently shadowed regions from that of the sunlit terrain.

"We are going to make definitive surface water ice measurements in permanently shadowed regions for the first time," said NASA's Barbara Cohen. "We will be able to correlate Lunar Flashlight's observations with other lunar missions to understand how extensive that water is and whether it could be used as a resource by future explorers." 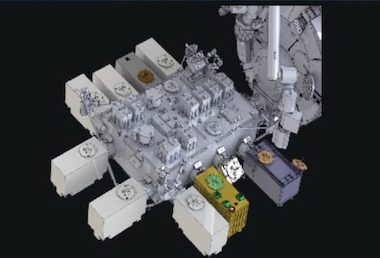 Nearer Earth, University of Wyoming researchers have used NASA's Global Ecosystem Dynamics Investigation (GEDI) mission to gather information about forest animals in the Yellowstone ecosystem, indicating that an orbital lidar approach could be valuable for other regions too.

As described in Forest Ecology and Management, GEDI collects high-resolution observations of the three-dimensional structure of Earth’s forest including precise measurements of forest canopy height, canopy cover and vertical structure.

GEDI was attached to the International Space Station in 2018 for a two-year mission that has since been extended until January 2023, and is expected to collect over 10 billion data samples from Earth's tropical and temperate forests. Observing at 1064 nanometers, GEDI's 3 lasers are split into 7 beams and produce 14 ground track spot beams.

Researchers paired the GEDI lidar data with ground-based observations to create forest height and structure maps, which were used to run computer models evaluating animal-environment relationships. Pairing of GEDI data with other sensors resulted in a substantial improvement in characterizing vertical and horizontal forest structure, according to the team.

"There is an untapped opportunity to enhance animal ecology and conservation planning with continued integration of GEDI information with freely available satellite data, to characterize attributes of forest structure across expansive areas," commented the project.